Enrique Peña Nieto inaugurated the phase II of Enel Green Power’s Sureste I wind farm. For the Mexican President the plant in the region of the Tehuantepe Isthmus is a message for the whole country. “We inaugurate today this wind farm and from here, from Oaxaca, we show one of the great benefits produced by the energy reform”. 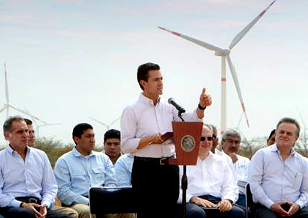 “We inaugurate today this wind farm and from here, from Oaxaca, we show one of the great benefits produced by the energy reform”. These words were spoken by Mexico’s President, Enrique Peña Nieto, at the inauguration of Enel Green Power’s Sureste I plant.

From the Sureste I wind farm the Mexican President decided to send a sign across the North American country, pointing to Enel Green Power’s plant as a tangible and successful example of the new energy course.

The inauguration ceremony of EGP’s plant, which took place on March 3, was also attended by the Mexican Home and Energy Ministers Miguel Ángel Osorio and Pedro Joaquín Coldwell, together with Gabino Cue, governor of the Oaxaca State, Enrique Ochoa Reza, director of the Federal Electricity Committee and Enel Green Power’s Head for Latin America Carlo Zorzoli.

“The energy reform aims at allowing our country to give strong impulse to the generation of a greater amount of higher quality, clean, environmentally-friendly and – above all – more affordable energy, with a positive impact on the economy of Mexican households”, said President Peña Nieto.

Mexico’s renewable energy development plan is ambitious: the government is aiming at increasing the share of green energy to 33 percent of the total installed capacity, 80 percent of which currently comes from fossil fuels and 17 percent from green energy sources. In this competition wind power will play an important role because the government expects wind to be a driving force in that development, as it set to more than triple its present installed capacity of around 2.5 gigawatts to 9.5GW.

The Sureste I wind farm, second phase, consists of 34 turbines with an installed capacity of 102 MW. Located in the region of the Tehuantepec Isthmus, in the State of Oaxaca, it has been built in a place with significant symbolic value for the energy history of this country. In fact, the first wind farm in Mexico, completed in 1994, was also built in the Tehuantepec Isthmus, at La Venta. It was the only one not just in this country but in the whole of Latin America, however in Mexico it did not rapidly push the renewable energy field. Since then, a lot of water has flown under the bridges or – in this case – a lot of wind has blown on the blades and today this is one of the countries in the continent that mostly aims at the development not only of wind power, but of all green sources.

“For EGP Mexico is a strategic market”, Carlo Zorzoli underlined. “So far our investment exceeds $1 billion and we want to go on strengthening our presence seizing the new business development opportunities currently offered by the energy industry following the broad and important ongoing reform. We continue to pursue other business opportunities in this country, with the aim of becoming a major operator on the new open generation market over the next few years”.