The renewable energy potential in India is 8,89,508 Mega Watt. Although the Government of India has been promoting the development of the sector for energy security as well as environmental protection, the exploitation of the two largest components i.e. solar energy and wind energy potential was only 0.35 and 21 per cent, and varied significantly across States.

The Climate Change conference in Paris recognized that the key to combating global warming lay in promoting clean energy. A CAG (Comptroller and Auditor General of India) Report on the “Renewable Energy Sector in India” placed in Parliament in the current winter session revealed that despite India’s ambitious renewable energy plans, the country’s performance in the clean energy sector has been poor. 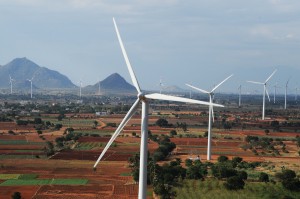 The CAG performance audit showed that in the 10 States endowed with 78 per cent of the national solar potential, the exploited potential varied from zero to 2.56 per cent. Gujarat and Rajasthan alone created more than 50 per cent of the capacity installed in the country but had exploited only 2.56 per cent 0.51 per cent of their respective potentials. Jammu and Kashmir and Himachal Pradesh with potentials of 1,11,050 MW and 33,840 MW respectively, had not set up any grid connected solar project.

The Ministry of New and Renewable Energy (MNRE) introduced three schemes between 2008 to 2010 for promoting the use of solar energy. There was a shortfall in achieving targets under all the schemes. The major shortfall was in achieving targets in setting up solar thermal power plants. Against the target of creating 500 MW of solar thermal power capacity, plants of 447.50 MW had not been commissioned till February, 2015. Government land of 3,404 acres leased at preferential rates to the developers for six solar thermal projects in Rajasthan had not been put to intended use.

In the 10 States endowed with 97 per cnt of the country’s wind potential, the exploitation varied from zero to 68 per cent of the States’ potential. Maharashtra had the highest exploitation at 68 per cent followed by Tamil Nadu at 51 per cent. Jammu and Kashmir, Odisha and Uttar Pradesh had not exploited the potential at all. More significantly, of the four highest potential States, three i.e. Gujarat, Andhra Pradesh and Karnataka had very low rates of potential exploitation ranging from five to 17 per cent.

There were problems in evacuation of wind power generated by the States due to non-availability of sufficient transmission infrastructure and non-synchronisation of generation. Lack of scientific techniques to predict the wind power also created problems in maintaining grid discipline. Tamil Nadu suffered a loss of over Rs 2000 crores as a result of these shortcomings during 2007-14.

The CAG audit said repowering of wind turbines could lead to better utilization of wind-rich sites through the installation of latest technology wind turbine models available and improve the capacity utilization factor by almost two to three times. Over 4,600 turbines rated below 500 kilo watt with an aggregate capacity of 1.6 Giga Watt (GW) and operational for more than ten to 12 years, were ideal for repowering. There was no progress in the re-powering of the old wind turbines.

Fossil fuels though cost effective and efficient, pollute the environment and contribute to the greenhouse effect and global warming. For instance, mining of coal results in the destruction of wide areas of forest land and is environmentally hazardous. Coal also produces sulphur dioxide which creates acid rain. All fossil fuels have a finite life the deposits that exist can not be replenished easily once they are used.

The renewable energy on the other hand is environment friendly and can provide energy security and offers distributed solutions. It is derived from natural processes that are replenished constantly such as sunlight, wind rain, tides, waves and geothermal heat.

Recognising that climate change was a global challenge, India has been actively engaged in multilateral negotiations at the United Nations Framework Convention for Climate Change (UNFCCC) and made voluntary commitment to reduce its carbon emissions intensity by 20 to 25 per cent by 2020 in comparison with 2005 levels. Although the Paris deal on climate action does not have any provision on binding emission reduction targets for developing countries like India, the country has already committed to the UNFCCC on Intended Nationally Determined Contribution (INDC) that it will achieve 40 per cent cumulative electric power capacity from non-fossil fuel based energy resources by 2030.