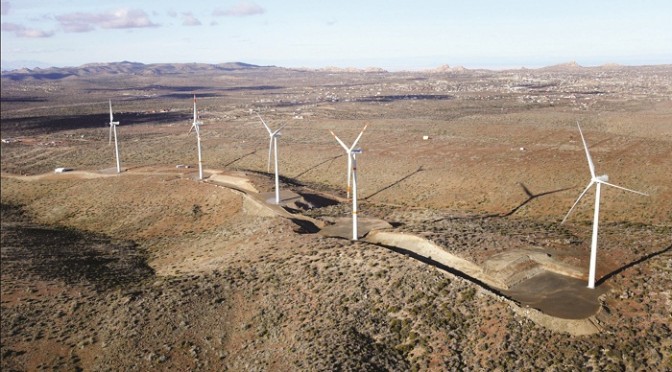 The Governor of Baja California, Francisco Vega de la Madrid, along with Dr. Luis Videgaray, the Mexican Secretary of Finance and Public Credit, and Pedro Joaquín Coldwell, the Mexican Secretary of Energy, presided over the ribbon-cutting ceremony of the first U.S.-Mexico cross-border wind farm, which cost approximately US$300 million to build and is supplying energy to San Diego County, California.

The project sponsors, InterGen e Infraestructura Energética Nova, S.A.B. de C.V. (IENova) and executives from San Diego Gas & Electric (SDG&E), the North American Development Bank (NADB) and the Border Environment Cooperation Commission (BECC), among others, celebrated the completion of the project known as Energía Sierra Juárez 1, which has an installed generation capacity of 155.1 MW and began commercial operations this past June.

The electricity generated by the wind farm is being purchased by SDG&E, a subsidiary of Sempra Energy that provides service to more than 2.25 million electricity and natural gas customers in San Diego and Orange counties.

Constructed on approximately 5,300 hectares (13,100 acres) of leased land near the city of Tecate, Baja California, the project consisted of designing, building and operating a wind farm with 47 wind turbines, each with a nominal capacity of 3.3. MW, as well as the construction of a 7.7 km (4.8 mile) transboundary, transmission line.

“This first cross-border wind project is a model of collaboration between the two countries,” stated NADB Managing Director Gerónimo Gutiérrez. “We are very pleased to have been a part of its implementation, and we believe that it will be first of many binational energy projects in benefit of the residents on our shared border.”

The environmental benefits related to this project include the displacement of more than 125,809 metric tons a year of carbon dioxide (CO2) and 189 metric tons a year of nitrogen oxides (NOx). The project is expected to generate electricity equivalent to the annual consumption of 70,832 households.
NADB is a financial institution established and capitalized in equal parts by the United States and Mexico for the purpose of financing environmental infrastructure projects along their common border. As a pioneer institution in its field, the Bank is working to develop environmentally and financially sustainable projects with broad community support in a framework of close cooperation and coordination between Mexico and the United States. For more information, visit www.nadb.org.

BECC is an international organization established by the Governments of the United States and Mexico to preserve, protect and enhance human health and the environment of the U.S.-Mexico border region, by strengthening cooperation among interested parties and supporting sustainable projects through a transparent, bi-national certification process in close coordination with NADB; federal, state and local agencies; the private sector; and civil society. For more information, visit www.becc.org.