The trend towards using renewable and alternative energy sources on land has gathered momentum over the last decade as the general public shipping companies and policy makers tackle the issues of air pollution, energy security and climate change. However at sea, the shift towards the widespread adoption of alternative energy is only now beginning to take shape. 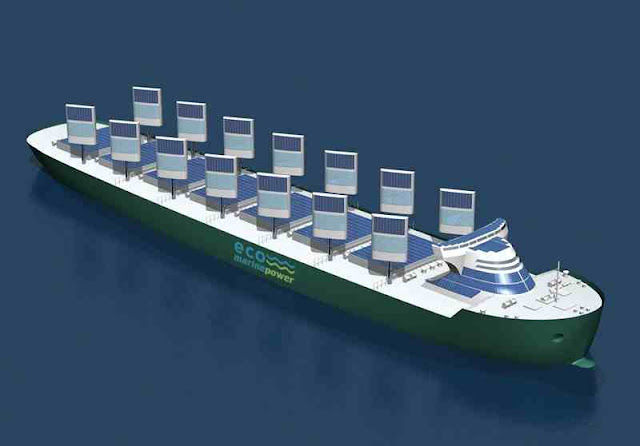 Recently the shipping industry has begun to seriously look at ways to reduce fossil fuel consumption and operate in a more environmentally friendly way. The concepts of “Green Shipping” or “Sustainable Shipping” are now becoming important issues for ship owners, shipping lines and ship builders globally.

In the 1970’s and 1980’s several Japanese ships were fitted with rigid sails of various types with the aim of reducing fuel consumption. This was driven largely by the oil crisis in the 1970’s which resulted in oil shortages and the price of oil soaring. However the oil crisis passed and as the prices fell in the 1980’s, the viability of rigid sails in terms of cost was undermined.

However Japanese ships such as the Shin Aitoku Maru and Usuki Pioneer which were fitted with JAMDA sails did prove that rigid sails reduced fuel consumption. The rigid sail concept has also been applied to a range of smaller vessels but it has not gained widespread acceptance to date on either large ships or smaller vessels due to numerous engineering & operational challenges.

Another way to reduce fuel consumption on-board ships is through the use of solar power. Recent advances in solar cell and photovoltaic module technologies have lead to solar power becoming a cost effective fuel reduction option on pleasure boats, ferries and tourist vessels. However on large ships the amount of fuel saved through the use of solar power alone is relatively small. So the idea of a commercially viable solar ship seems impractical at the moment..or is it?

Perhaps rather than having a ship with rigid sails or a ship with solar panels a better approach would be to design a system that could tap into the power of the wind and sun together. The challenge in developing such a solution is to overcome many of the practical problems entailed in trying to use sails and solar panels on large ships operating in the harsh marine environment.

There is a combined wind & solar power solution for shipping on the horizon – the Eco Marine Power (EMP) Aquarius MRE (System) This innovative wind and solar Marine Renewable Energy (MRE) solution is designed so that the practical limitations of using rigid sails and solar panels on ships are overcome.

A ship fitted with the Aquarius MRE System such as a passenger ferry, cruise ship, bulk carrier, survey vessel or oil tanker will be able to tap into the limitless power of the wind and sun.

These “hybrid powered” ships will use wind and solar power together as a source of energy and propulsion (along with the ship’s main engines) in order to reduce harmful emissions and lower fuel consumption.

On a large ship, 1000 tonnes or more of bunker fuel could be saved annually by using the Aquarius MRE System. This means that using renewable energy on ships is not only good for the environment but also good for business.

An onboard solar power array can either mounted on the sails or deck (or both) and this will charge batteries or the power will be fed into the DC or AC power distribution system. The energy stored in the batteries could also be a useful source of emergency power.

At the centre of the Aquarius MRE System is EMP’s own rigid sail technology called the EnergySail. This innovative device can incorporate a number of renewable energy technologies and can be installed on wide variety of ships. The EnergySail can be used alone or as part of an array and is positioned automatically by a computer control system developed joint by EMP and KEI System Ltd of Osaka, Japan. This computer system is known as the EnergySail Automated Control System (ACS).

In a link with history, the EnergySail’s will be produced by Teramoto Iron Works of Onomichi, Japan – one of the companies involved in the manufacture of rigid sails in the 1970’s and 1980’s.

To interface with other equipment on the ship such as the main engines & generators another computer system jointly developed by EMP and KEI System – the Aquarius MAS (Management & Automation System) – will form part of the overall Aquarius MRE System. This marine computer system is also able to calculate emissions, monitor fuel consumption and interface with marine renewable energy solutions.

The Aquarius MRE System with its combination of technologies will offer ship owners and operators an attractive return on investment (ROI) which combined with the environmental benefits, will help this hybrid marine power technology gain widespread acceptance across the maritime industry.

The concept of using wind and solar power together on ships is not science fiction nor is it decades away. EMP has completed lab tests of the EnergySail along with the EnergySail ACS (Automated Computer System) and sea trials involving key elements of the Aquarius MRE System have commenced.

EMP’s Aquarius Eco Ship concept was also featured at Sea Japan 2014 in Tokyo along with some of the key Aquarius MRE (System) technologies.

During 2015, EMP and its strategic partners will continue their pioneering work towards developing a fully integrated wind & solar power system for ships aimed at making sustainable shipping a reality. This work will involve establishing an outdoor test and evaluation area in Onomichi, Japan (to be known as the Onomichi Marine-Tech Test Center or Onomichi MTTC) and the production of an EnergySail unit for sea trials.