Google has launched a new project that aims to show where solar energy has the most promise in the United States. Many homeowners have begun to show aggressive interest in solar power, but some do not live in states with abundant sunlight, making solar energy less viable than other forms of power. Google’s new initiative, called Project Sunroof, is designed to help homeowners determine whether solar power is a viable option for them, based on their location. 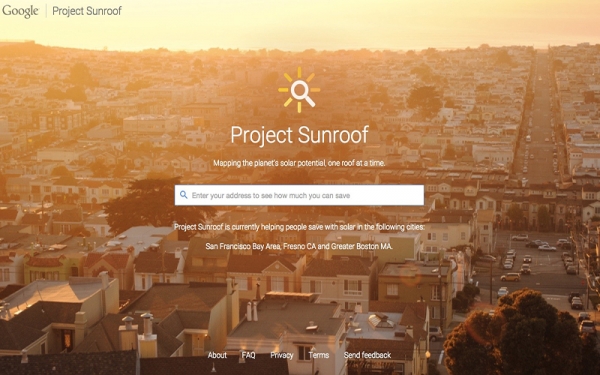 Project Sunroof will be using data acquired through Google Maps, which will then be used to provide consumers with information concerning the viability of solar energy in their area. Using the Project Sunroof website, they will be able to insert their address and use a variety of analytics to determine the solar quality of their homes. Information that determines solar viability includes where the property is located, how much sunlight the roof of the property receives, and whether or not there is vegetation that can provide shade around the property. The site will also direct homeowners to solar panel installers that are in their area, if they are interested in embracing solar energy.

Project Sunroof may be expanded throughout the country in the future Currently, Project Sunroof is only available in a limited capacity. Those living in Fresno and San Francisco, California, as well as Boston, Massachusetts, will be able to use the website in order to research solar energy. There are plans to expand the project throughout the United States, but Google has not provided a timeline for such a venture as of yet. Google may also expand the project throughout the world, depending on the support it receives from homeowners.

The new project represents another step towards Google’s intention of supporting renewable energy more aggressively. The company has become one of the strongest supporters of solar energy and other forms of clean power and has been working to encourage more homeowners and businesses to embrace clean energy in order to become more environmentally friendly.