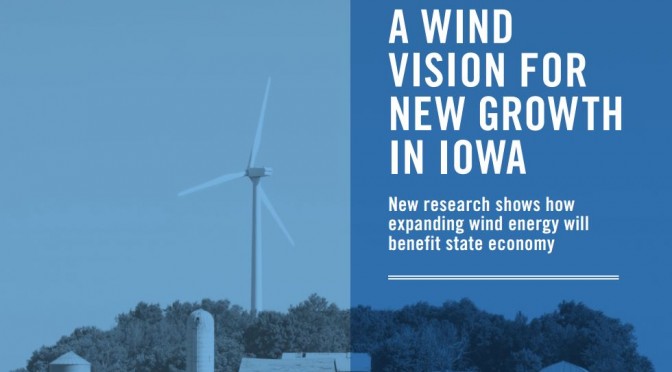 Counties will continue to collect property taxes from the wind turbines and associated new buildings. It’s possible that businesses supporting the wind energy industry will spring up. Holtkamp’s happy to see the county become a major renewable energy producer, and just as happy to see the positive impact it’s having on local business owners. “It’s a win-win with the wind,” he said. 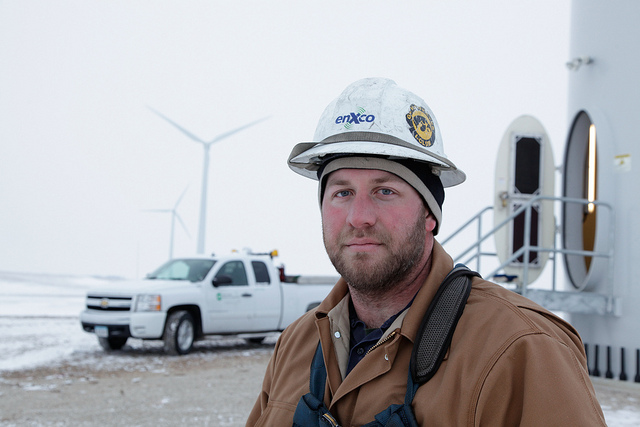 Before he makes it back to the seating area at Shortee’s Pit Stop and Speedway Cafe, Ted Porter is stopped by owner Jodi Smith.

As they chat, Smith asks him what he’d like for lunch. Without even looking at a menu, Porter places his order.

Porter, a safety inspector who’s from Wyoming, knows the menu inside and out. He’s become a regular at the Primghar cafe and many other businesses as he travels between his camper at a Sanborn campground to job sites near Primghar.

He’s one of hundreds of temporary workers who have filled nearly every available house and apartment in O’Brien County and neighboring counties and frequent restaurants, grocery stores and other businesses while working for one of the many companies involved in construction of the massive Highland Wind Energy wind farm near Primghar.

“The community has treated us really well,” Porter said. “I live in a rural area, so this is very comfortable for me.”

Workers like Porter have become a common sight in businesses in Primghar and other O’Brien County communities, providing a boost to the local economy.

Workers stop in Smith’s convenience store and cafe at all hours from opening to closing.

A block away outside Pro Go convenience store, a construction worker wearing a yellow reflective safety vest and carrying a handful of food climbs into his Dodge Ram pickup truck with Utah license plates and pulls away. It’s the type of scene repeated several times each day, Pro Go manager Kiley Hicks said.

“Obviously it’s been a big boost in our business,” she said.

In May 2013, MidAmerican Energy Company announced the Highland Wind Energy project, a $1.9 billion development that will add 448 wind turbines producing 1,050 megawatts of electricity at five sites in Iowa. The largest of those sites is in O’Brien County, where 211 turbines producing 495 megawatts are being erected. MidAmerican later announced it was expanding the Highland project, and a total of 214 turbines will be built.

All O’Brien County wind turbines are expected to be completed by the end of this year. So far, 108 have been erected and 72 are generating power, MidAmerican spokeswoman Ruth Comer said.

Additionally, MidAmerican is building a 120-mile high-voltage transmission line from a new substation under construction near Sanborn. It will extend to the east and south through Clay, Humboldt, Kossuth, Palo Alto and Webster counties and add more capacity for carrying wind-generated electricity. It’s expected to be finished in 2016, Comer said.

The Highland wind project is huge, estimated to be, upon completion, one of the 10 largest wind projects in the United States.

Since work began last year, it’s had a huge impact on Northwest Iowa. An estimated 500 workers have moved here temporarily. That doesn’t include supporting workers, such as the truck drivers who deliver materials and supplies.

“Our biggest concern is how can we accommodate all these workers,” said Kiana Johnson, O’Brien County Economic Development Director.

Before construction started, Johnson compiled a data base of all hotels and houses for sale or rent in O’Brien, Clay and Cherokee counties. Nearly every available room or house is full, she said. Area campgrounds are filled with the campers and trailers that some construction workers choose to live in.

“We even have people who are renting rooms in their houses (to workers),” Johnson said.

While making their temporary homes in local communities, workers are hitting local businesses for nearly every imaginable service.

The benefits go beyond those obvious services, said Rodd Holtkamp, a Primghar banker and member of the county’s economic development board.

Some have bought memberships at local golf courses for this year. Mechanics have as much business as they want doing oil changes, tire and vehicle repairs. Car washes are busy.

“Everybody is pretty positive about it,” Holtkamp said.

As the businesses benefit, so do their employees. Dave Hicks, manager of Producers Co-op in Gaza, said he’s had to add drivers because of the co-op’s increased fuel sales. Every day, he sends a tank truck to a wind contractor’s equipment and material site to top off the seven 500-gallon fuel tanks there. Producers trucks also take fuel directly to cranes erecting the wind turbines.

Servicing the wind energy companies is leading to new business in the area, Hicks said. Many people weren’t aware of the co-op’s fuel service before turbine construction began.

“We get tremendous exposure because people see our trucks out there all the time,” Hicks said.

This business boom may slow, but there may be more on the way.

Chicago-based Invenergy, which developed the Highland project and sold it to MidAmerican, is considering another O’Brien County wind farm about half this size. There are other potential developers interested in the county’s abundant wind resources, too.

Holtkamp said the temporary work will have a permanent impact.

MidAmerican is building an office in Primghar, where 20-25 permanent employees will work once the wind farm is finished. That means new residents, some of them likely bringing children who will attend local schools.