Statoil plans to take the final investment decision in September on building a floating wind farm off the coast of Scotland, set to be the first of its kind in the world, a spokesman for the company said on Tuesday. 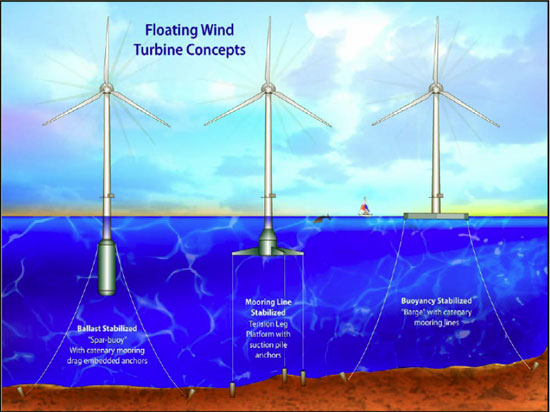 Statoil, which has run a single floating offshore wind  turbine for several years in Norway, is now planning to build five floating turbines, each with 6 megawatt capacity, off Aberdeen in an area where the water depth is around 100 meters.

With development areas for foundation-fixed offshore turbines limited to shallow seas with depths up to 50 meters, and with some countries experiencing strong opposition against the visual impact of turbines on the land, floating offshore is seen as the next major growth area for the wind industry.

“We expect to make the final investment decision on the pilot project in Britain in September, and this could be the first floating wind power park in the world,” Statoil’s spokesman Morten Eek said.

Its Hywind turbine, mounted on a ballasted vertical steel cylinder that floats upright and is anchored to the seabed, has a unique navigation system developed by Statoil to keep it in the position.

“We’ve seen that the technology is working and is able to withstand winter storms,” Eek said, referring to a demonstration project in Norway. “We see potential in the Hywind concept to compete cost-wise with the bottom-fixed foundation at 30 meters water depth and deeper.”

The Norwegian floating turbine, anchored 10 km off the south-west coast in 2009, had an average efficiency rate of 40.7 percent during 2010-2014, and produced 8.2 gigawatt-hours of electricity per year, data from Statoil showed.

In Britain, Statoil plans to use Siemens turbines with 75 meter long blades — comparable with a wing span of an Airbus 380 aircraft — to boost efficiency.

Statoil established a separate business division in low carbon and renewable energy in May, reflecting its aspiration to gradually complement its oil and gas portfolio.

The firm has also been conducting a feasibility study for floating wind in Japan, Eek said.

France also plans to launch a tender for several pilot floating offshore wind farms with combined capacity of up to 120 MW this month, an industry group said.

Portugal too has plans to build a 25 MW floating wind demonstration farm.

The pre-commercial pilots in France and Britain will be a major step toward wider rollout worldwide.

Denmark’s Dong Energy, world leader in offshore wind power, however, is not rushing to embrace the immature technology.