Merkur Offshore has signed with respectively Alstom and DEME a binding Turbine Supply Agreement and Balance of Plant Contract for the construction of the Merkur Offshore wind farm, including supply and installation of 66 Alstom Haliade 150-6MW offshore wind turbines. 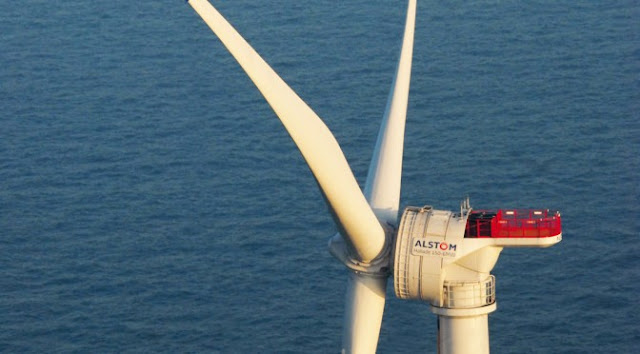 The turbines will be supplied by Alstom and installed by DEME in one of the biggest German wind farms, the 400 MW Merkur Offshore wind farm, located 45 km north of Borkum in the North Sea, which will be built and operated by Merkur Offshore. The wind farm project Merkur Offshore has passed all authorizations and has a secured grid connection. The construction will start in 2016 and will be undertaken by GeoSea, member of the DEME Group.

Alain Bernard, Director and Chief Executive Officer of the DEME Group further stated: “Combining favorable sea bed conditions with one of the strongest and most reliable wind resources in the world, Merkur Offshore will be one of Germany’s largest wind farms in the North Sea, contributing significantly to Germany’s energy transition plans and the European clean energy targets.”

Developed for the industry´s most challenging offshore conditions, Alstom Haliade 150-6MW direct drive wind turbine combines proven technology and innovation. With its high energy yield – thanks to its 150 m diameter rotor – Haliade can supply clean wind power to the equivalent of about 5,000 households. The first prototype of Haliade was installed onshore in 2012 in Le Carnet (France), followed by the first offshore pilot-installation in the wind park of Belwind, 46 km off the Belgian cost. In the meantime, Haliade obtained the DNV-GL certification, officially confirming the engineering, design, production, operation and efficiency of the turbine and service as prerequisite for the commercial operation of Haliade.

All Alstom offshore wind turbines will be manufactured in the new French facilities in Saint-Nazaire.

The DEME Group has participated in the construction of many large-scale European offshore wind farms including Alpha Ventus, EnBW Baltic 2 and Trianel West Borkum II wind farm in German waters, Westermost Rough and West of Duddon Sand in the UK, Walney and the Ormonde farms in the Irish Sea and C-Power and Northwind wind farms off the Belgian Coast. GeoSea is currently working on several offshore wind farm projects such as Godewind in Germany and Kentish Flats Extension in the UK. The DEME Group owns a large fleet of specialised vessels including heavy-lift offshore jack-up vessels Innovation, Neptune, Goliath and Thor and fall-pipe vessels Flintstone, Rollingstone and Seahorse.

Alstom is a global leader in the world of power generation, power transmission and rail infrastructure and sets the benchmark for innovative and environmentally friendly technologies. Alstom builds the fastest train and the highest capacity automated metro in the world, provides turnkey integrated power plant solutions and associated services for a wide variety of energy sources, including hydro, nuclear, gas, coal and wind, and it offers a wide range of solutions for power transmission, with a focus on smart grids. The Group employs 88,000 people in around 100 countries.

In Germany, Alstom has a workforce of 7,600 people who are working on 23 sites in power generation, energy transmission and rail infrastructure.

The Belgian dredging, hydraulic engineering and environmental group DEME has earned itself a prominent position on the world market in a few highly specialist and complex hydraulic disciplines. Having its core-business in dredging operations and land reclamation, the group diversified into hydraulic projects at sea, services to oil and gas companies, the installation of offshore wind farms, environmental activities such as soil remediation and sediment recycling, and revalidation of brownfields and wreck clearance. Its multi-disciplinary know-how and experience, project synergies and integrated business structure allowed DEME to grow into a global solutions provider. The Group owns one of the most modern, high-tech and versatile fleets for dredging and hydraulic engineering activities. Active since 1852, the Group’s solutions have never been more relevant than today, and this is reflected in its key figures: DEME employs 4,600 people worldwide and realised a turnover of EUR 2.58 billion in 2014.