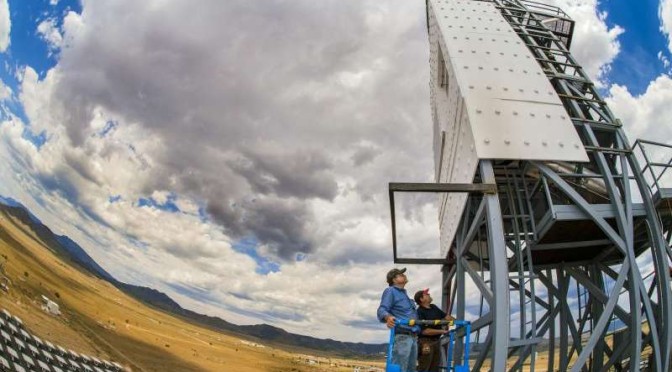 Testing heats up at Sandia’s Concentrated Solar Power Tower with high temperature falling particle receiver. Researchers at Sandia National Laboratories are working to lower the cost of solar energy systems and improve efficiencies in a big way, thanks to a system of small particles. This month, engineers lifted Sandia’s continuously recirculating falling particle receiver to the top of the tower at the National Solar Thermal Test Facility, marking the start of first-of-its-kind testing that will continue through 2015. The Sandia-developed falling particle receiver works by dropping sand-like ceramic particles through a beam of concentrated sunlight, capturing and storing the heated particles in an insulated tank. The technology can capture and store heat at high temperatures without breaking down, unlike conventional molten salt systems. 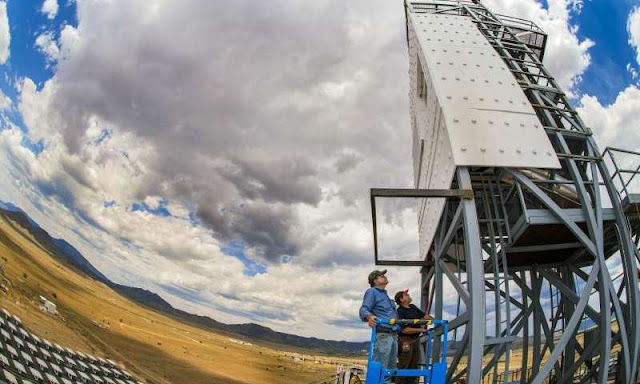 Sandia engineer Cliff Ho, the project’s principal investigator, said the goal of the testing is to develop a prototype, cost-competitive falling particle receiver that demonstrates the potential for thermal efficiency greater than 90 percent, while achieving particle temperatures of at least 700 degrees Celsius.

“This technology will enable higher temperatures and higher efficiency power cycles that will bring down the cost of electricity produced from concentrating solar power,” Ho said. “In addition, the ability to cheaply and efficiently store thermal energy directly in the heated particles will enable power production at night and on cloudy days.”

Falling particle receiver technology is expected to further advance the state-of-the art in concentrating solar power tower systems capable of generating up to 100 megawatts of electricity.

Sandia’s partners in the Department of Energy project are the Georgia Institute of Technology, Bucknell University, King Saud University in Saudi Arabia and the German Aerospace Center. The project is funded by the U.S. Department of Energy’s SunShot Initiative, which aims to reduce solar energy costs and expand the use of solar energy technologies throughout the United States.

Sandia design engineer Josh Christian said the on-sun testing at the solar tower will occur in two phases. First, researchers will test an insert designed by Georgia Tech that slows falling particles inside the receiver like a Pachinko board to increase the temperatures of the particles as they fall through.

Later this summer, Sandia engineers will remove the Georgia Tech insert from the receiver and evaluate free-falling curtain configurations.

Weather and other factors will affect the pace of the testing.

“New Mexico is great for this project because our state has pretty consistent solar insolation throughout the year,” Christian explained. “However the biggest thing we need to know is how much power is going into the falling particle receiver. So a cloudy or hazy day is a big challenge for us. An ideal day for testing is a clear day with no clouds and no wind.”

The tower at Sandia’s National Solar Thermal Test Facility stands 200 feet tall and is the only testing facility of its kind in the United States.