A floating offshore wind power project in northern Japan will soon add a 7-megawatt wind turbine, the largest of its kind ever to be used at sea. 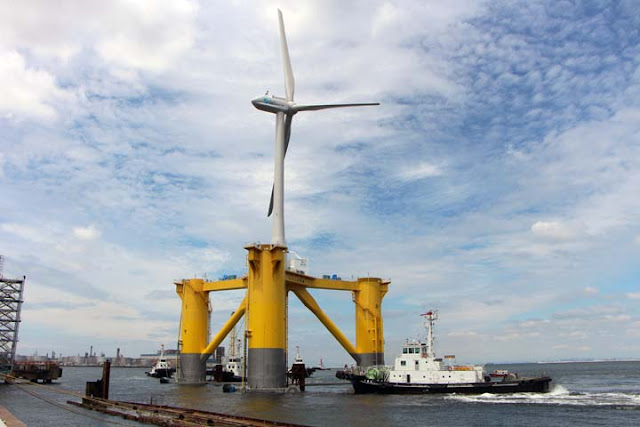 The new turbine will join a smaller 2-megawatt model, which has been generating power at the project about 20 kilometers (12 miles) off the coast of Fukushima since November 2013. The turbines are part of a pilot project led by Marubeni Corp. and funded by the Japanese government.

“Countries are exploring floating offshore wind technology and Japan is in a sense at the same level with Norway and Portugal,” as they each have similar projects with about 2 megawatts of capacity, Yasuhiro Matsuyama, a trade ministry official in charge of clean energy projects, told reporters Wednesday.

“This will be the world’s first pilot project to use such an extremely large-size turbine,” he said, adding that the trial operation may start in September.

The government has allocated 50 billion yen ($405 million) for the project. The technology involves attaching turbines to structures that float in areas too deep for traditional towers fixed to the seafloor.

The new turbine and a floating structure are both made by Mitsubishi Heavy Industries.