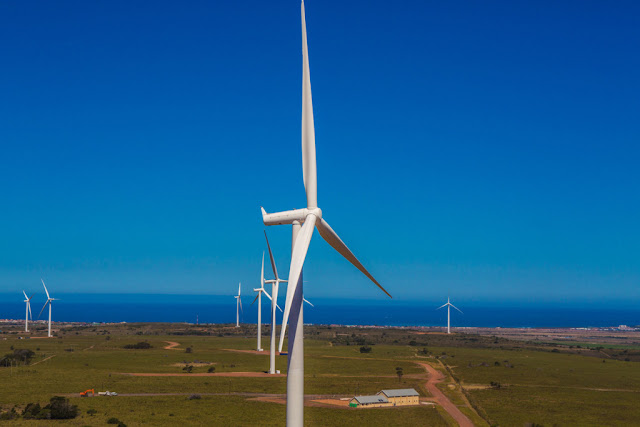 The West Coast 1 project is part of the Renewable Energy Independent Power Producer Procurement (REIPPP) programme, through which South Africa intends to procure 3,625 MW of renewable energy by the end of 2016, to help curb its reliance on coal for electricity and contribute towards carbon emission reduction objectives. West Coast 1 will allow for an offset of an estimated 5.6 million tonnes of CO2 over the 20-year duration of its Power Purchase Agreement (PPA).
ENGIE holds a 43% equity stake in the project, while Investec Bank Limited (“Investec”) holds 34.5% and KTH 20%. The remaining 2.5% has been allocated to a Community Trust, for the purpose of developing and sustaining the surrounding community. Vestas supplied the forty seven 2 MW wind turbines, and will also be charged with the long term service of the facility.

The construction of West Coast 1, which started in June 2013, created more than 600 jobs, 450 of which were for surrounding communities. The operation of the wind farm will create permanent jobs for these communities over the 20 years of the PPA. The achievements of the project, both in terms of job creation and South African local content purchase, exceeded the objectives for local economic development agreed with the South African Government.

Tristan Bosser, CEO of Aurora Wind Power, commented: “West Coast 1 wind farm has started commercial operation on schedule. The success factors that contributed to this achievement are solid partnerships, strong support from both local and national Authorities, and highly motivated teams. I sincerely thank everyone for their efforts and support. I’m proud that we have attained our goal with the utmost respect for our economic development objectives and that we have been able to engage with the local communities, notably through our long-term partnership with the Valued Citizen Initiative. We are also able to report zero working accidents during the construction period of 2 years, a notable achievement of which we are extremely proud.”

Kgaugelo Kgomari, Director of Investments at KTH, stated: “KTH is privileged to be a partner with ENGIE and Investec on the West Coast 1 project. We are proud to be one of the drivers of the development of clean energy sources for South Africa whilst ensuring that there is impactful economic development opportunities for the local communities.”

About ENGIE (formerly GDF SUEZ)
ENGIE develops its businesses (power, natural gas and services) around a model of responsible growth to take on the major challenges of the transition to a low-carbon economy: access to sustainable energy, climate-change mitigation, security of supply and the rational use of resources. The Group provides communities, governments, cities and businesses with highly efficient and innovative solutions based on its expertise in four key sectors: independent power production, natural gas, renewable energy and energy efficiency services. ENGIE employs 153,000 people worldwide and achieved revenues of almost €75 billion in 2014. The Group is listed on the Paris and Brussels stock exchanges and is represented in the major international indices In South Africa, ENGIE (in joint venture with local partners) is also constructing 1,000 MW of peaking power facilities in Durban (Dedisa, 335 MW) and Port Elizabeth (Avon, 670 MW). The Group has been nominated as preferred bidder for Kathu Solar Park, a 100 MW Concentrated Solar Power project. engie.com

About Investec Bank Limited
Investec is an international specialist bank and asset manager that provides a diverse range of financial products and services to a niche client base in three principal markets, the United Kingdom, South Africa and Australia as well as certain other countries. The group was established in 1974 and currently has approximately 8,100 employees. Investec focuses on delivering distinctive profitable solutions for its clients in three core areas of activity namely, Asset Management, Wealth & Investment and Specialist Banking. In July 2002 the Investec group implemented a dual listed company structure with listings on the London and Johannesburg Stock Exchanges. The combined group’s current market capitalization is approximately GBP4.4bn.

KTH is a leading black-owned and managed investment holding company in Africa with an asset base of R15 billion. Our investment philosophy is based on building enduring relationships with management teams and investment partners to create value. KTH is a long term investor with no finite investment horizon. The Company holds investments across a diverse range of sectors including property, resources, infrastructure, power, financial services, health and media.

Aurora Wind Power has signed a long-term agreement with Valued Citizens Initiative for the implementation of a life skills development program in public schools in Saldanha Bay Municipality. By providing academic and social justice support programs, Valued Citizens promotes self-development to enable people to be value-driven and to improve their lives, thereby encouraging citizens to engage with South African democracy.