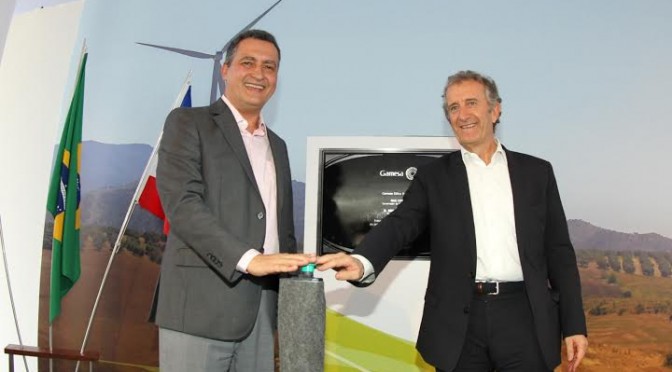 Spanish wind-turbine manufacturer Gamesa on Monday unveiled its expanded plant in Brazil, a country that accounted for 22 percent of total megawatt sales in 2014 and serves as a platform for supplying customers across Latin America.

Work to expand the plant in Camaçari, a city in the northeastern state of Bahia, started in July 2011.

Gamesa will begin assembling the nacelles, or cover housings for the generating components of a wind turbine, this month at the plant.

The Spanish company expects to be able to further promote the use of wind energy as an alternative to non-sustainable energy sources in Brazil since it will now be able to offer complete turbines.

The new plant, which started operating last September, currently produces nacelles for the 2 MW G97 turbine and the company plans to begin producing the G114, a wind turbine that cuts energy costs by 10 percent, compared to the previous generation of turbines, in January 2016.

Gamesa has invested 35 million euros ($39.4 million) since it began manufacturing in Brazil, where it has more than 1,000 suppliers and has achieved production of up to 640 MW per year.

The Spanish company expects to double its workforce to 570 by the end of this year.

“At a time when the macroeconomic situation is not as clear as in other countries, Gamesa wants to show its commitment to Brazil,” Martin said, adding that the company was betting on the South American country’s “enormous potential.”

Gamesa managing director in Brazil, Edgard Corrochano, said the South American nation was playing a leading role in the development of the alternative energy source.

Gamesa has been expanding internationally in recent years, focusing on Brazil, where it opened its first Latin American plant in 2011.

One contract covers the equipment for a 166 MW wind farm belonging to Companhia de Energias Renovaveis, or CER, and the other is for the gear for a 48 MW wind farm owned by Eletrosul, a unit of state electric utility Eletrobras.

Gamesa also has operations in Mexico, Honduras, Uruguay and Argentina, among other countries in Latin America, which accounts for nearly 37 percent of the company’s global sales.