There has been a noticeable increase in the number of photovoltaic (PV) projects in the United States aiming to be operational before the expiration of the 30% Federal energy investment tax credit (ITC) on 31 December, 2016. 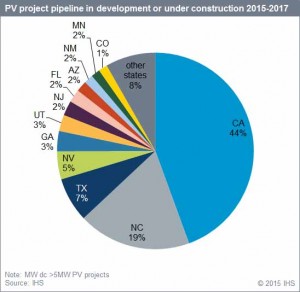 According to IHS, the leading global source of critical information and insight, over 32 gigawatts (GWs) of projects greater than 5 megawatts (MWs) in size are still in development or under construction. Not surprisingly, the main bulk of projects is in California, but several other U.S. states also have many large utility projects in development aiming for completion this year or next.

Based on the latest information from the IHS Solar Deal Tracker database, NextEra has indicated that 1.5 GWs of Hanwha Q Cells modules will be installed by the end of 2016. This purchase will cover projects in several states, including California, Georgia, Florida, and Hawaii.

“Canadian Solar dramatically increased its project pipeline in the United States, with the company’s recent acquisition of Recurrent Energy,” said Christine Beadle, senior analyst for IHS Technology. “Many of these projects are set to be completed prior to the 2016 deadline, including a 150 MW project for Austin Energy in Texas and several other projects in California.”

Lengthy delays in permitting and approval — or the inability to secure a power off-taker — could be critical, as developers strive to complete projects in all states in time to be operational and to qualify for the Federal ITC. Some areas in California are plagued with contentious environmental issues, from Native American Tribes fearing the removal or destruction of artifacts from their ancestral homeland to environmental issues. One project, Imperial Solar Energy Center West, was already under construction when work was halted for a few weeks earlier this year because the flat-tailed horned lizard became a possible candidate for protection under the California Endangered Species Act.

“Newly proposed projects appear to be primarily located in less contentious areas and developed at sizes that are likely to promote a high potential for success in a short time,” Beadle said. “Recent project approvals by the Bureau of Land Management encourage installations in designated Solar Energy Zones.”

The most recent wave of proposed projects is in the 20MW to 100MW range. Some projects have been in development for a long time, but when size and location is optimal, there is a greater likelihood of success. Other projects in less optimal areas will eventually be completed, but possibly not before the deadline, which seems to have affected priorities and caused a saturation of PV projects in certain areas.

If no bill to extend the deadline is signed into law, the Federal ITC for commercial and utility solar projects will drop to 10 percent in 2017. Completion of these projects prior to the deadline could be crucial to ensure financial viability. Any extension of the 30 percent Federal ITC into 2017 or beyond would certainly be a positive driver for U.S. solar growth after 2016, as these early-stage projects will be ready to go into construction; however, at this time an extension looks unlikely.