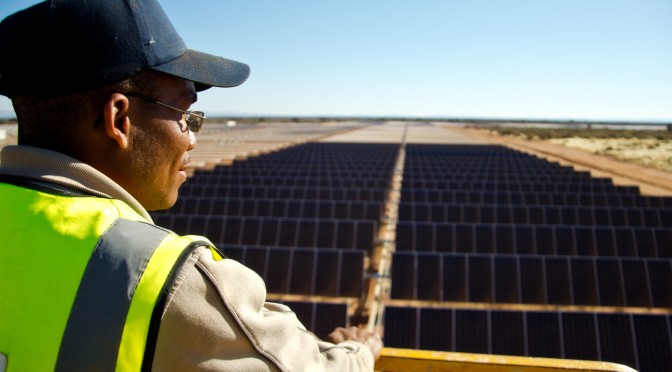 Spanish renewable energy firm Acciona aims to intensify its footprint in the green energy business in Southern Africa to ride the wave of a market it sees trebling by 2050, an official said on Tuesday.

The Madrid-listed firm last year linked its solar plant in South Africa’s Northern Cape to the ailing power grid, which is ran by state-owned utility Eskom that is struggling to keep the lights on in Africa’s most advanced economy.

South Africa has said it is committed to introducing green energy into its power mix, 95 percent of which is coal at the moment, to redress its chronic electricity shortages.

The government has awarded contracts to firms such as Acciona in a plan allowing private power producers to contribute as much as 3,725 megawatts to the grid through renewable energy projects by the end of 2016.

With year-round sunshine and thousands of miles of windswept coast in South Africa, investors are warming to the renewable energy potential.

Acciona, which also produces hydropower and biomass energy through burning grass, wood and energy crops, said it will complete constructing a wind farm in Cape Town this month with a capacity of 138 megawatts.

Esteban said power demand would soar three-fold in the region by 2050 with South Africa accounting for 74 percent but a key challenge in the sector was finding the right skills.

He said Acciona still expected coal to play a major role in South Africa’s energy mix due to the commodity’s abundance, but noted that renewables would be increasingly important because of the department of energy’s drive for variety energy sources.