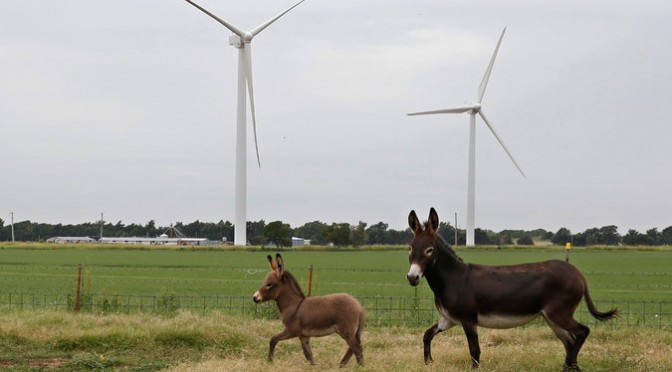 All 50 states could become wind energy producers, according to an Energy Department report released Tuesday, once the next generation of larger, taller turbines in development hits the market.

More than 1,000 American wind turbines are already accessing higher wind resources with towers reaching 100 meters or more above the ground, rather than the 80 meter standard that had been the state-of-the-art for multiple years. Heights up to 120 meters or more are already common in Europe, allowing the stronger, steadier winds at that elevation to be tapped. At 110-meter hub heights, DOE expects the land area with physical potential for wind deployment in the U.S. to increase 54 percent — and at 140-meter hub heights, the potential wind deployment would increase 67 percent.

Advancement in turbine technology, including raising hub heights to 140 meters and lowering specific power, would open up an additional one-fifth of the land area of the United States for wind turbine locations, lighting up many parts of the country, especially the Southeast U.S.

According to DOE’s recently released Wind Vision report, select areas in the Midwest, Northeast, and Southeast are expected to see economical wind deployment for the first time due to this next generation of wind turbine technology, including Alabama, Arkansas, Connecticut, Georgia, Kentucky, Louisiana, Mississippi, North Carolina, South Carolina, and Virginia, which currently have no commercial wind turbines, and additional parts of Michigan and Minnesota.

Since 2008, advances in current wind turbine technology combined with 110 meter hub heights have doubled the geographic area where it is feasible to generate electricity, so that nearly half of the land area of the contiguous United States could be viable.

The bigger machines — reaching as high as 460 feet — could eventually make faster winds at higher altitudes an economical source of electricity, an important part of reaching the nation’s goals in fighting global warming, said Ernest Moniz, the secretary of energy.

“We believe very much the central role of wind in meeting our climate challenges, and we’re very committed in this direction,” Mr. Moniz told reporters after speaking in Orlando, Fla., at the annual conference of the American Wind Energy Association, the industry’s main trade group. 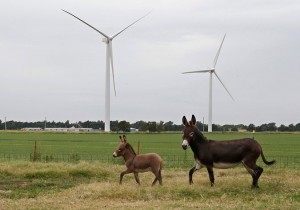 “It’s going to require being able to take advantage of a broader set of resources,” he said, and it will give wind power a “bigger footprint,” onshore and off.

The industry, which has spread to 39 states, has at the same time been moving skyward with taller turbine towers and larger blades, reaching on average 260 feet above the ground, according to the Energy Department. 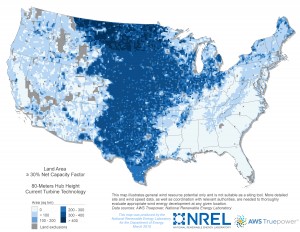 In roughly the last six years, that has taken robust wind development to states like Michigan, Ohio and Indiana, where wind power can often be as inexpensive as conventional sources like coal.

Now, energy officials and executives are pushing toward machinery that would reach 360 to 460 feet high. That would increase the wind development potential in an additional 700,000 square miles — more than a fifth of the United States — bringing the total area to 1.8 million square miles.

The potential expansion would affect areas where wind farms already exist and bring areas into the market. The main regions where height would increase potential wind production include the Southeast, Northeast, states around the Ohio River valley and the Great Lakes, and parts of the interior West and Pacific Northwest.

In all, the report said, land-based and offshore wind could produce 16,150 gigawatts of electricity a year, more than 10 times the country’s consumption. Wind installations now account for 65 gigawatts, just under 5 percent of national demand.

At the same time, working with the larger equipment would require innovation to meet the logistical challenges of building and transporting machinery that might exceed bridge heights or other physical limitations, the report said, as well as further evaluation for conflicts with human and wildlife use of the added areas.