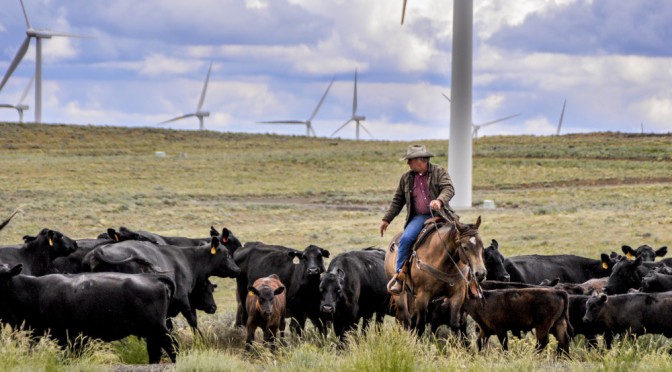 Construction of a 25 MW, 15 wind turbines new wind farm is expected to begin Monday, following difficult negotiations between the developer and NorthWestern Energy, which will purchase the power. It’s called Greenfield Wind LLC.

The Montana Public Service Commission, which had rejected a settlement agreement on the power purchase price between NorthWestern and WINData LLC on Dec. 16, reconsidered and approved the 25-year contract March 4. Now construction can proceed.

“Getting the power contract has been the biggest challenge here,” WINData CEO Martin Wilde said at the Greenfield site.

On Thursday, stakes marked the locations where towers will begin rising in August and September. A strong breeze was blowing 18 mph, which is typical.  “This is perfect wind,” Wilde said.

Wilde, an early pioneer of wind development in Montana, would like to see more projects like the Fairfield and Greenfield wind farms constructed by Montana-based, independent power producers, but it isn’t easy, he says.

“In this case, they kind of had it out with us, and we sort of held our own and settled,” Wilde said of negotiations with NorthWestern.

It negotiated a 25-year deal with NorthWestern for the Greenfield energy.

NorthWestern argued that the price of the electricity, $50.49-per-megawatt hour, was too high, Wilde said, and “we fought back.”

NorthWestern always gives prime consideration to how a price will be reflected on the bills of NorthWestern’s 342,000 electricity customers in Montana, NorthWestern spokesman Butch Larcombe said.

“And a lot of times the developers have a different price in mind than we do,” Larcombe said.

One of the goals was to encourage development of renewable energy.

Greenfield is a qualifying facility.

One is the standard size, which is a maximum of 3 megawatts. Those projects come with “standard offer” contracts, and negotiations are not required.

Qualifying facilities that are larger than the standard size require negotiations, and the Greenfield wind farm is the first large QF wind project negotiated and approved in Montana, Wilde said.

Instead of NorthWestern producing the power, Wilde said, it is purchasing green energy from an independent power producer, bringing diversity to its power mix, Wilde said. WINData carries the risk for generation, not NorthWestern’s ratepayers, he added.

When NorthWestern needs power the most is at times of peak demand, when it’s very cold or hot, Larcombe said.

“And unfortunately, a lot of times, that’s when the wind isn’t blowing,” Larcombe said. “We have concerns about the wind’s ability to meet the needs of our portfolio at this point.”

Wilde started out in the wind business in Montana in 1991. He’s owned his own companies and also worked for the U.S. Department of Energy.

He’s investigated many sites for wind potential in state. That leg work has attracted large wind developers, he said.

“We were trying to get commercial wind energy in Montana,” he said.

While Montana has seen some successes in wind development, Wilde says the development climate is poor compared to other states such as Texas.

“It’s like learning how to box in prison,” Wilde said. “It’s a difficult environment to do wind, period.”

The export of wind-generated electricity from Montana could be robust, but Wilde says the NorthWestern seems intent to stick with hydro and coal generation.

NorthWestern owns or has contracts with 17 different wind projects in Montana with a capacity of 282 megawatts, he said.

“To say we’re not interested or haven’t been involved in wind production really isn’t an accurate statement,” he said.

When NorthWestern purchased PPL Montana’s hydroelectric facilities in November, it changed the look of the utility’s energy portfolio, he said.

The dams are helping NorthWestern meet the typical needs for electricity in Montana, he said.

Wind in the Fairfield area doesn’t blow trains off the tracks, as it’s been known to do in locations such as Browning, Wilde said.

However, there is always a breeze.

General Electric turbines that produce 1.7 megawatts each will be erected at the Greenfield wind farm.

The distance from the ground to the tip of the blades will be 422 feet, or about 42 stories.

They are the largest wind turbines in the state, Wilde said.

“They lend themselves to calm but constant winds, which is the kind of wind we have here,” Wilde said.

The wind farm should be connected to the grid by November, Wilde said.

WINData is partnering with Wind Power of San Francisco, which will help to arrange financing through large investment banks, Wilde said.

It usually costs about $2 million per megawatt to build a wind farm, which would put the project in the $45 million to $50 million range.

Dick Anderson Construction out of Great Falls has been hired for the job. GE will assist in installing the turbines.

The 15 wind towers will stand on a ridge in two rows on a ridge overlooking wheat and hay fields.

The land is being leased from four property owners who will receive royalties based on production.