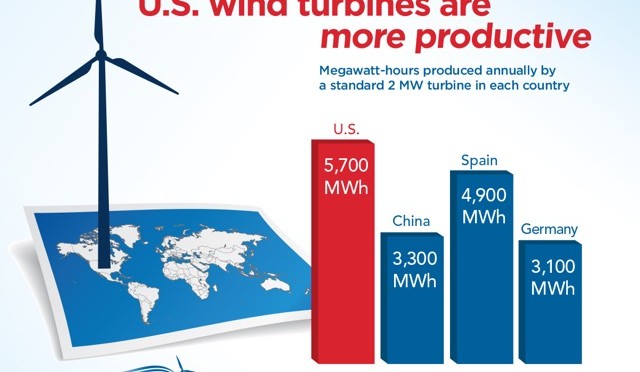 “Wind turbine technology has advanced in just a few decades from the Model T era to more like that of a Tesla,” said AWEA CEO Tom Kiernan. “Taller towers, longer blades and improved electronics to operate and maintain the turbines are all part of this revolution.”

Modern wind turbines require a wind speed of only about 8 miles per hour (5 meters per second) to start generating utility-scale quantities of electricity. Sites with comparatively lower average wind speeds can now be considered for commercial turbines for the first time. “The Great Lakes region is an early beneficiary of this,” said Emily Williams, Deputy Director of Industry Data and Analysis. “In states like Michigan we’re absolutely seeing a wind rush.” With continued technology advancements, states that currently have no commercial wind turbines at all, primarily in the Southeast, will see development opportunities open up in the coming years.

High-wind areas are becoming even more productive thanks to longer blades, as the average annual “capacity factor” or percentage of the maximum rated capacity that a turbine generates year-round now tops 50 percent in some cases. Some older sites are being repowered by new turbines. Others are receiving a variety of refinements to existing turbines such as blade tip extensions, vortex generators, and improved electronics, making them more productive.

“Every year, our industry makes wind turbines that are better, smarter, safer and more powerful. Those innovations are bringing down the levelized cost of wind energy for American consumers,” said Chris Brown, President of Vestas-American Wind Technology.  “But we’re not done yet.  Our goal each day is to keep working to bring wind on par with other traditional energy technologies in the near term.”

These innovations have contributed to a drop in the price of wind-generated electricity. The levelized cost of wind energy (LCOE) has dropped 58 percent in just five years, according to the most recent study by Wall Street financial advisory firm Lazard. LCOE is the net cost to install and operate a turbine, divided by its expected lifetime energy output.

The upcoming April 2015 release of the AWEA U.S. Wind Industry Annual Market Report will provide a comprehensive update on all the latest technology and cost reduction trends occurring in the U.S. wind industry. The over 100-page long report will also include the latest on corporate purchaser trends, annual job and investment figures, state-by-state details, market rankings of major players, and more. Attendees at AWEA’s upcoming WINDPOWER 2015 Conference & Exhibition from May 18 – 21 in Orlando, Florida, will see first-hand the latest and greatest cutting-edge wind technology trends. “Advances in Turbine Components & Subsystems R&D” on May 19 and “Supply Chain Evaluations to Support Technology Trends” on May 20 will educate attendees about the technology advancements that will go into the next fleet of wind turbines installed in the U.S. and how wind is more affordable than it was just five years ago.

Advances in wind turbine technology also include increases in nameplate capacities over time. The average turbine rating of a wind turbine installed during 2014 was 1.94 MW, 8 times larger than a typical turbine in 1990, generating 17 times more electricity.

Wind Vision finds that wind can supply the U.S. with 10 percent of its electricity needs by 2020, 20 percent by 2030 and become a leading source of electricity by 2050. Obtaining Wind Vision would come with substantial economic and environmental benefits. By the 2030 scenario wind would create 230,000 well-paying jobs, $650 million in annual lease payments to landowners and nearly $1.8 billion in tax payments to host communities. Further growth would result in $260 billion gallons of water conserved in the year 2050 alone and an additional $108 billion in public health costs avoided by cutting air pollutants by 2050.

Next-generation technology, optimized layout of turbines at wind farms for maximum power and other improvements in the design and siting of wind farms are all key elements that will enable the industry to meet Wind Vision.

“Continued innovations in rotor size and hub height could further expand the land area achieving 30 percent or greater net capacity factor by an additional 67 percent with impacts extending well into the Southeast, East, Great Lakes and Interior West,” according to the Wind Vision report. “Future generation wind turbines with expanded capture capabilities and hub heights of up to 140 meters could unlock additional wind power resource potential across nearly 720,000 square miles, nearly tripling the amount of developable land area for wind when compared with 2008 turbine technology.” Wind Vision found meeting the 35 percent scenario of U.S. electricity by 2050 would use less land than the equivalent of one-third of U.S. golf courses.

Technological innovation, hard-working Americans and successful federal tax policy have led the U.S. to become number one in the world in wind energy production. Without stable, long-term federal policy, however, continued innovation and further cost reductions of wind power technology needed to obtain Wind Vision would be placed in jeopardy.

The wind energy industry started 2015 with near-record levels of construction activity, with over 12,700 MW of wind in the pipeline that will deliver even more clean and affordable energy to our nation’s electricity generation portfolio. Once recently added U.S. wind projects have had a full year of production, total wind output will rise to powering the equivalent of 18 million homes.