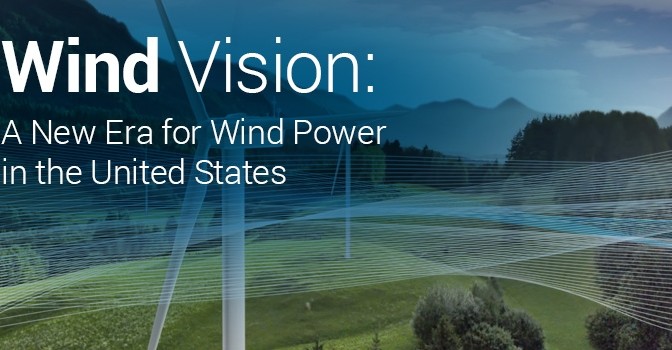 The U.S. Department of Energy believes those numbers can grow a lot more, projecting that wind turbines could supply as much as 35 percent of U.S. electricity by 2050.

That is the conclusion of a new report released Thursday by the DOE. “Wind Vision: A New Era for Wind Power in the United States,” draws a roadmap for how carbon-free wind power can become one of America’s leading sources of energy as the country looks for ways to reduce greenhouse gas emissions to combat climate change.

The report, touted by the Obama administration, says that up to 113 gigawatts of new wind power capacity can be installed nationwide by 2020 and up to 404 gigawatts by 2050. That would be enough electricity to power nearly 100 million homes.

Building that much capacity over the next three decades is an ambitious but attainable goal, the report says. It would mean a 1 percent increase in consumer electricity costs before 2030, shifting to a 2 percent cost savings by 2050 as more wind farms come online. If wind power expands that much, U.S. greenhouse gas emissions can be reduced by about 14 percent.

As wind grows, investments in wind energy would reach as much as $70 billion annually by 2050, at which point the industry would support 600,000 jobs, the report says.

“Wind’s growth over the decade leading to 2014 has been driven largely by wind technology cost reductions and federal and state policy support,” the report says.

The report comes as wind growth has begun to tick upward following a 90 percent decline in development after Congress allowed the Production Tax Credit to expire in 2013, drastically reducing the tax incentive for wind power development.

The report recommends that federal and local governments do what they can to bolster wind’s competitive position in the power market or the existing manufacturing infrastructure will languish and fade over time without support, and an opportunity to reduce greenhouse gas emissions may be diminished. 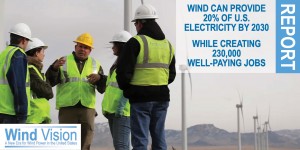 Already, the U.S. government is opening vast areas of the Atlantic off the New England coast to new wind development, including 742,000 acres of open water near Martha’s Vineyard, Mass., where enough wind turbines could be built to power 1.4 million homes.

The report envisions wind power development occurring in every state at a time when offshore development in the U.S. is far behind European countries, where more than 2,300 turbines in 73 wind farms twirl off the shores of 11 different countries.

Tom Kiernan, CEO of the American Wind Energy Association (AWEA), said in a statement that the report provides the wind industry with aggressive targets to meet, urging lawmakers to support the industry so it can double in size by the end of the decade.

AWEA plans to launch a year-long campaign to convince the public to support wind power.

The “Wind Vision” report, drew an immediate rebuke from some members of Congress who see wind as a bad deal.

“Our country uses about 25 percent of the electricity in the world. Relying on windmills to produce that electricity when nuclear power is available is the energy equivalent of going to war in sailboats when nuclear ships are available,” U.S. Sen. Lamar Alexander, R-Tenn., said in a statement.

The Wind Vision scenario describes how consumers will benefit immediately from more stably priced energy. With more wind energy, electricity prices would be 20% less sensitive to fluctuations in the price of fossil fuels, the report finds. Consumers would see &#036;280 billion in economy-wide savings from reduced natural gas prices alone.

Investing in more U.S. wind turbines would pay further economic dividends, such as by creating more jobs and causing further reductions in air pollution. The upfront investment to achieve these benefits will cost electric consumers only pennies a month in the early years, the report shows.

Wind Vision anticipates that the cost of land-based wind energy can still be further reduced 33% by 2030. AWEA says the report finds the industry has already exceeded the cost reductions and growth trajectory outlined in the 2008 report, because of technological improvements and smart, performance-based policies. Through 2013, the U.S. wind industry exceeded that report’s aggressive cost-reduction projections by 32% and its wind deployment projections by 27%.

“The wind industry has a track record of success,” says Kiernan. “We are now a proven technology ready to scale up even further.”

Other findings of the Wind Vision report include the following:

– As the cost of wind energy has fallen dramatically, wind development has attracted over &#036;100 billion in private investment since 2008.

– The wind industry currently employs more than 50,000 people in the U.S., with a manufacturing supply chain of more than 500 factories across 43 states.

– Wind energy has already cut electric sector carbon emissions by over 5%; those emissions will fall by an additional 16% by 2030 as wind increases from 4.5% of the U.S. electricity mix to 20%.

– Cumulatively through 2050, wind’s pollution reductions would avoid &#036;400 billion in climate change damages. Wind would save an additional &#036;108 billion in public health costs by cutting other air pollutants, including preventing 22,000 premature deaths.

How to get there
Elements of the roadmap for achieving the Wind Vision include the following:

– Next-generation technology, as well as advanced standards and testing;

– A robust U.S. manufacturing base and expanded domestic supply chain for advanced materials;

– Best practices for performance, reliability  and safety adopted across the industry;

– Mitigation of public use concerns, clear regulations and better public understanding; and

– Workforce development, with technical training from primary schools to universities.

“Although the report does not analyze the impacts of policies or make policy recommendations, two key measures needed to achieve these results are a stable federal production tax credit and states’ greater use of wind to comply with the Clean Power Plan,” says Kiernan.

“The U.S. can stay on track to a cleaner, more diverse energy portfolio if Congress provides wind energy with the long-term, stable policy it provides to other energy sources.”