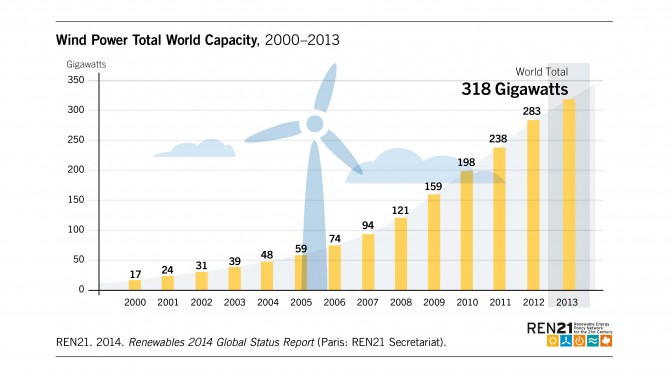 More than 50 GW of installed wind power capacity was added worldwide during 2014, according to a new report from the World Wind Energy Association (WWEA).

According to WWEA data, the yearly amount pushes the total wind power capacity close to 370 GW, or 40% greater than 2013, which is significantly larger than the previous record in 2012, when 44.6 GW was installed.

Among the more notable findings, the WWEA data revealed the following:

For the first time since 2009, the speed of growth was bigger than in the previous year: The global installed wind power capacity grew by 16% compared with the year 2013, significantly higher than the previous 12.8%.

Wind power is now an undisputed pillar of the electricity supply in many parts of the world. The 370 GW of wind power installed worldwide can now contribute close to 5% of the global electricity demand. Several countries – such as Denmark, Spain, Portugal, Ireland, U.K. and Germany – have now reached 10% or more of their power coming from wind, the association notes.