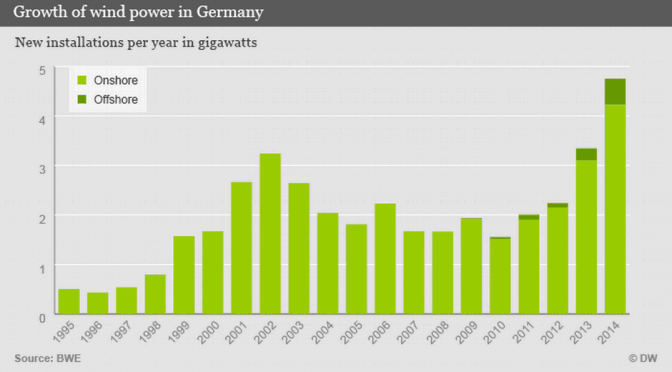 2014 saw the record installation of more than 1,700 wind turbines in Germany. They supply as much electricity as two nuclear power plants, giving an important boost to renewable energies. 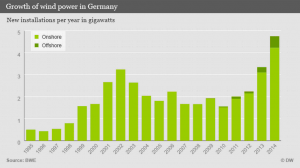 “The 2014 figures look very good. That was the best year for the buildup of wind energy in Germany. The industry can be very satisfied,” said Hermann Albers, President of the German Wind Energy Association (BWE).

In 2014 wind turbines with a total output of 4.8 gigawatts (GW) were installed. Since 2015, these devices have generated over 38 GW of power in Germany, covering approximately 10 percent of the country’s demand for power.

And for 2015, the prospects are good. The wind energy industry expects an additional 3.5 to four GW. To facilitate Germany’s transition to renewable energies, a decisive buildup of wind power is necessary, since photovoltaics and biomass took a strong hit in the last two years.

But wind power “made up for the deficit,” said Albers.

The strong buildup of wind power is a consequence of the Fukushima nuclear disaster. In a broad consensus, Germany decided to phase out nuclear power in 2011. Eight nuclear reactors went immediately off the grid, and the last nine should be shut down by 2022.

To cover this power gap, German states strongly pushed for the development of wind energy and designated new areas of land for wind turbines. Planning to installation took two to three years, and the success of the measures is now paying off: The buildout of wind energy more than doubled from 2011 to 2014.

Meanwhile, the offshore wind energy industry is also gaining confidence. In 2014, 142 large wind turbines with a total output of 0.5 GW were connected to the power supply. Offshore wind power also doubled to one GW. After a long hard start, wind energy is gaining momentum offshore.

By 2020, the German government plans to construct additional offshore wind turbines with a combined capacity of 6.5 GW, which would cover about five percent of Germany’s demands. The industry is optimistic that they will achieve these goals.

This decentralized energy production is very popular among the state’s three million citizens.

“Nine out of 10 wind turbines are turned by citizens’ hands,” explained Nicole Knudsen from the North German Wind Energy Association, citing this as the state’s proven recipe for success.

For rural regions, the development of wind energy is an asset: Revenue for citizens and communities rises, new jobs are created, and it puts an end to the rural exodus.

According to an assessment by Albers, rural areas will also be an important engine for the development of wind energy in Germany in the coming years. “Among German states, there’s almost a competition,” he said.

“The strong additional buildup in Germany was accompanied by significant growth in international markets, in which German manufacturers are well positioned with their technological leadership,” said Lars Bondo Krogsgaard of the VDMA’s steering committee for wind turbine construction. “This leadership can only be secured if we continue to dynamically develop the technology on Germany’s own market.”

Albers sees renewable energies as a great opportunity for Germany and Europe to take on international competition in the long term.

“It will be able to overtake automobile engineering in significance in the future,” he said.

Meanwhile, more and more developing and emerging countries are turning to cheap and climate-friendly technology. According to estimates from VDMA Power Systems, around 44 GW of wind power worldwide was installed on land in 2014 – an increase of 31 percent from 2013.

China remains the global leader in expanding wind power capacity. For 2014, Bloomberg Energy Finance calculated an additional capacity of 20.7 GW from China and 4.7 GW from the United States. There was also a strong push, according to the Word Wind Energy Association (WWEA), from India, Canada, Brazil, South Africa, France and the United Kingdom, with around two GW each.