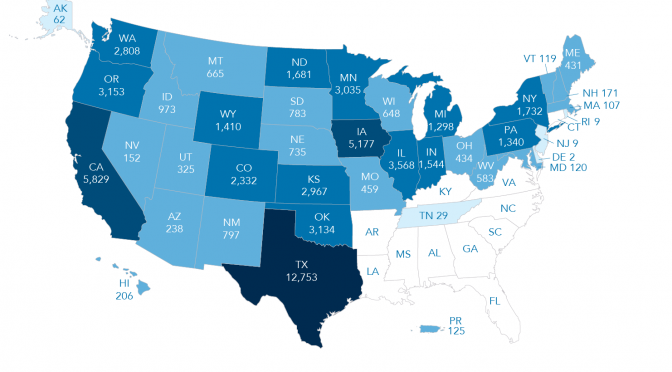 2014 saw the completion of 4,850 megawatts (MW) in generating capacity, with cumulative installed capacity increasing eight percent to a total of 65,875 MW. That current wind capacity will avoid over 130 million metric tons of CO2 emissions annually, equal to taking 28 million cars off the road, when the current wind capacity produces generation for a full year.

However, the amount installed in 2014 still falls far short of the record 13,000 MW that the U.S. wind energy industry was able to complete during 2012.

Industry leaders blamed uncertainty over federal policy. The renewable energy Production Tax Credit was only extended for two weeks at the end of last year, and has now expired again.

“Wind is gaining strength, but as recent history shows, we can do a whole lot more,” said AWEA CEO Tom Kiernan. “We’re looking forward to working with Members of Congress from both sides of the aisle so that a reasonable, responsible tax policy is in place that allows the wind industry to continue lowering costs and investing billions of dollars in U.S. communities.”

Jonathan Weisgall, Vice President for Legislative and Regulatory Affairs of the Berkshire Hathaway Energy Co., told reporters on a call today that the $1.9 billion wind farm his company is building in Iowa is the largest economic development project in the state’s history. When finished, it will pay farmers $3 million a year for land leases, and supply customers such as Google, Facebook, and Microsoft that have committed to buying clean energy.

“Our customers want wind,” Weisgall said. “We like wind because it’s a hedge against fossil prices…and wind, with no fuel costs associated, can keep those rates stable.”

He added that wind energy “helps diversify the grid and improves our energy security,” and it enables utilities like his to reduce carbon emissions and meet current and future environmental standards. “It’s good for our customers, it’s good for the environment, and it’s certainly been good for the state of Iowa,” Weisgall said.

“It has been U.S. policy for the last 100 years to encourage energy production by giving tax relief to different energy sources,” said Kiernan. “Every other source of electricity in this country has their tax relief. Congress must find a way forward so we don’t lose years of investment and send this promising industry over another cliff.”

The primary federal incentive for building new wind farms, the PTC provides a tax credit of 2.3 cents per kilowatt-hour generated for the first 10 years of a project’s life. It has encouraged $125 billion dollars of investment across America, creating 500 U.S. manufacturing facilities and technological innovations that lowered the wind power’s costs by more than half in the last five years.

“The PTC has helped the U.S. build some of the best infrastructure the country has ever seen,” Kiernan said. “As President Obama mentioned this past week, we’ve been so successful that the U.S. is now number one in the world in wind energy production. U.S. wind farms now provide enough power for the equivalent of 18 million typical American homes.” 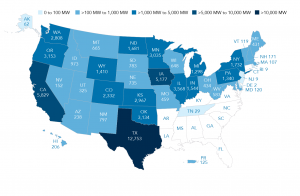 General Electric, Siemens and Vestas in 2014 continued their domination of wind turbine installations in the US market, grabbing about 95% of 4.85GW of new capacity.

GE installed about 2.75GW capacity, followed by Siemens with about 1.241GW and Vestas with 584MW. Gamesa, Nordex and two small suppliers accounted for the balance.

GE has been the market leader here since it acquired Enron’s wind business in 2002. Its core product is the 1.6-1.85MW platform, which is the US industry’s big seller. It also offers a 2.5-2.85MW platform.

GE generates much of its business from a handful of dominant developers led by NextEra Energy Resources and Invenergy, and electric utilities that have been buying its heavy equipment for decades.

Siemens’ main product is its popular 2.3MW turbine, having sold hundreds to MidAmerican Energy, its biggest US customer owned by billionaire Warren Buffett’s Berkshire Energy holding company. Pattern Energy is another key buyer. Siemens is also a long-time equipment supplier to utilities,  which has facilitated the sale of wind turbines.

Vestas, which lost its traditional number two US ranking to Siemens in 2012, has undergone a resurgence in the market over the past year booking record orders. Vestas is particularly strong in Texas, by far the leading wind state.  Its main offering is a 2MW turbine, although a 3-3.3MW platform has also sold well.

Absent from the US market for a second consecutive year were Acciona, Mitsubishi, Senvion and Suzlon, all with at least 900MW capacity installed here during the past decade.

Of the four, only Acciona has an assembly plant here, from which it has been filling export orders. Capital Dynamics announced it has ordered 100 3MW turbines from Acciona for a project in Texas for 2015 delivery.

Mitsubishi, which ranked fourth or fifth in the US market for a decade, shelved plans for a plant in Arkansas amid a patent row with General Electric. Senvion has not been able to transfer its success in neighboring Canada to the US market and sustain it, after ranking fifth in new US capacity in 2012. Suzlon has steadily declined here, peaking at 738MW in 2008.

Also, absent in 2014 were Chinese and South Korean turbine suppliers. Other than Goldwind, they have failed to establish a meaningful market presence here.

Nearly 30,000 well-paying jobs and tens of billions of dollars in private investment were lost due to the PTC lapse at the beginning of 2013, the last time Congress allowed the credit to expire even briefly. Wind installations plummeted 92 percent in 2013 amid the uncertainty. A multi-year extension now would enable the industry to continue lowering costs, further expanding the benefits wind energy provides to consumers.

Utilities continue to highlight wind’s ability to keep costs low for consumers in announcing their latest purchases of wind power.

“When viewed as a package, our wind and solar contracts are expected to save LES customer-owners approximately $429 million over the next 25 years,” said Kevin Wailes, administrator and CEO of Lincoln Electric System (LES), in announcing a power purchase agreement to add 173 MW of wind energy to its portfolio.

Kansas-based Westar Energy said, “It is good news that we can rely on wind resources to provide energy at competitive prices,” in announcing a 200 MW PPA for new wind to its portfolio, which will bring Westar’s total to 1100 MW.

Wind power saved consumers $1 billion over just two days across the Great Lakes and Mid-Atlantic states during the 2014 “Polar Vortex” event, according to a new AWEA white paper. A May 2013 Synapse Energy Economics report found that doubling the use of wind energy just in that region would save customers close to $7 billion a year.

American wind power now supports well-paying manufacturing jobs at over 500 manufacturing facilities in 43 states, and an average of 73,000 total jobs over the past five years. Investment in new U.S. wind farms has driven an average of $12 billion a year in private investment over the last five years. Wind farms deliver over $180 million a year to landowners in lease payments, with over 98 percent located on private land.

A forthcoming Department of Energy report, Wind Vision, due for release this spring, shows wind could double to supply 10 percent of the nation’s electricity demand by 2020, double again to reach 20 percent by 2030, and hit 35 percent by 2050.