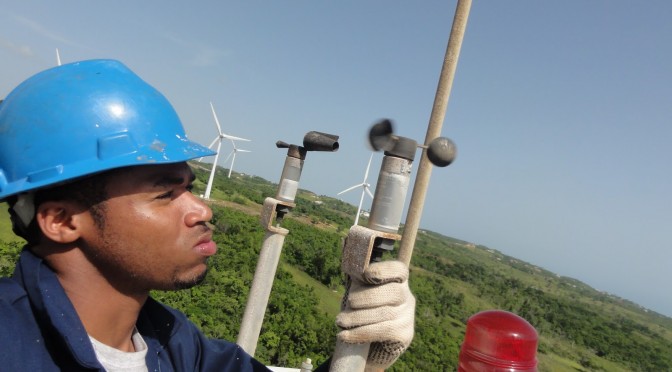 These are: a wind energy development, which is expected to provide an additional 58 MW, to complement the 30 MW currently generated by Wigton Wind farm in Manchester; and a solar power facility to generate approximately 20 MW of power, which is slated for Content in Clarendon.

Science, Technology, Energy and Mining Minister, Phillip Paulwell, said ground is expected to be broken for the projects in February, and the works are scheduled to be completed in March 2016.

The minister, who was addressing a public forum on Wednesday (January 14), at the University of the West Indies’ (UWI) Mona Campus in St Andrew, said that the projects, along with similar initiatives being undertaken by the Government, are indicative of the  Administration’s commitment to diversifying Jamaica’s energy base.

“We are going to be moving away from our main energy source being liquids (such as) gasoline, heavy fuel oil(s), (and) diesel, and moving towards… natural gas and its derivatives,” he said, assuring that “we intend to fully embrace renewables.”

Diversifying energy options, he contended, will ensure that “at any given time, (should) we have one of the sources declining (that) all our eggs would not have been in the same basket.”

Paulwell further said that notwithstanding the current fuel price reduction, and the anticipation that this might continue for up to next 18 months, “we are not going to relent on the efforts that we have started (to pursue energy alternatives),” that will further lower costs to the country.

“In fact, we are going to redouble those efforts, because…as the prices fall today, we do anticipate that they will rise sometime soon. We have… to realise that there (are) indeed (alternatives to imported fuels that we can use),” he said.

Noting the target stated in the national energy policy, of having 20 per cent of energy generated from renewable sources by 2030, Paulwell said consideration could be given to revising the target to 30 per cent, “as the technology that can facilitate this increase.”