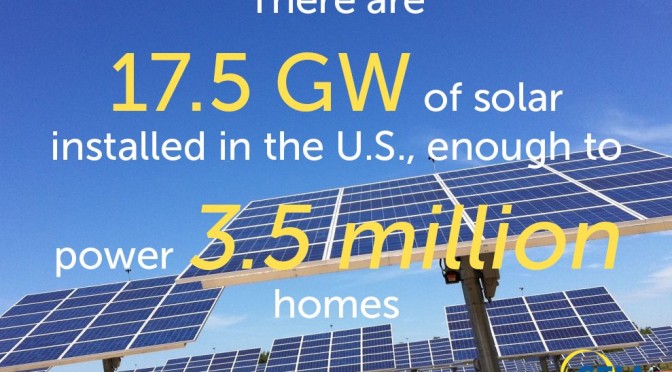 This quarter was the second largest quarter in history for solar growth, and SEIA and GTM Research predict another record-breaking year for 2014, with total installed capacity reaching three times the size of the market just three years ago.

Growing at an annual rate of more than 20 percent – far outpacing the growth of the overall U.S. economy, a new report released today shows that the U.S. solar industry added more than 31,000 jobs in 2014, bringing total employment in the sector to 173,807 workers. The results were released by The Solar Foundation (TSF), a widely-respected, non-profit organization.

“Solar energy is becoming an increasingly important part of America’s future – and this new report offers additional proof of that,” said Rhone Resch, president and CEO of the Solar Energy Industries Association (SEIA). “Not only is solar helping to power more and more homes, businesses, schools and government buildings, but it’s also helping to power the U.S. economy in a very significant way – and, frankly, we’re just scratching the surface of our enormous potential.

“The U.S. solar industry’s remarkable growth since 2006 is due, in large part, to smart and effective public policies, such as the Solar Investment Tax Credit (ITC), Net Energy Metering (NEM) and Renewable Portfolio Standards (RPS). By any measurement, these policies are paying huge dividends for both the economy and environment,” Resch continued. “Today, the U.S. has an estimated 20.2 gigawatts (GW) of installed solar capacity, enough to effectively power nearly 4 million homes in the United States – or every single home in a state the size of Massachusetts or New Jersey – with another 20 GW in the pipeline for 2015 and 2016. This is going to help to create even more new jobs. What’s more, solar helped to offset an estimated 20 million metric tons of harmful CO2 emissions in 2014—the equivalent of taking 4 million cars off U.S. highways or saving 2.1 billion gallons of gasoline. We applaud The Solar Foundation for its hard work in putting together this comprehensive report, which helps to highlight the growing importance of solar energy to America and our future.”

To help celebrate this news, millions of people from across the United States and around the world are expected to take part in SEIA’s 2nd annual National “Shout Out For Solar” Day – set for Friday, January 16, and taking place on Facebook, Twitter and other social media venues. The event is being promoted on social media by leading companies and environmental groups across the nation.