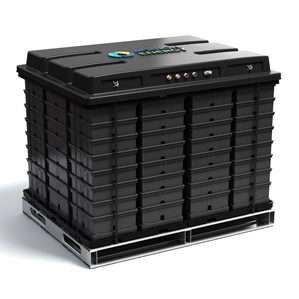 Several new types of battery, each capable of cost-effectively storing the energy output from a wind power or solar energy, are finally being hooked up to power grids.

The so-called grid batteries could lower the cost of renewable energy by eliminating the intermittency problem that arises when the sun isn’t shining or the wind isn’t blowing.

On Wednesday, Aquion Energy, a Pittsburgh-based startup that makes one such battery, announced that the technology will allow a small electricity grid in Hawaii to run around the clock on solar power.

Conventional batteries would be too expensive or unreliable to use for grid-scale storage. The new batteries coming online use materials and manufacturing processes that not only lower costs but should also allow them to last for decades (see “Storing the Sun” and “A Battery to Prop Up Renewable Energy Hits the Market”).

Similar grid-battery projects are taking off in California, propelled by new regulations designed to accommodate shifts in renewable energy (see “A Battery Made of Iron Could Improve the Economics of Solar and Wind Power”). Last month, Ambri, a startup based in Cambridge, Massachusetts, that makes batteries out of molten metal, announced that it would connect its batteries to the grid for the first time later this year in a series of pilot projects in Massachusetts, New York, Hawaii, and Alaska (see “Ambri’s Better Battery”).

The new battery technologies aren’t yet cheaper than natural gas plants—the current technology of choice for backing up renewables—in all situations. That’s largely because the batteries are being produced in low volumes.

But Aquion and Ambri are targeting specialized markets. Electricity prices are particularly high in Hawaii, making batteries for backing up wind and solar power more valuable. The Hawaii microgrid will serve as backup for a 176-kilowatt solar panel array, large enough for more than 40 medium-sized homes, and will store 1,000 kilowatt-hours of electricity, enough to power a typical U.S. home for more than a month. Aquion’s factory could supply 200 such projects per year.

Ambri’s pilot projects target a slightly different situation, where reducing peak power demand from the grid is important. If customers can store some electricity on site, they can reduce their draw on the grid at key times, and thereby greatly reduce their power bill.

One of Ambri’s pilot projects may also help address a key problem in New York City, where the lines that import power into the city are sometimes nearly strained to the breaking point. The company’s batteries could lower demand, and reduce the need to build additional power lines. They could also serve as backup in the case of power outages, says Phillip Guidice, CEO of Ambri. The latter is a key concern for the city, which has been battered by powerful weather, such as superstorm Sandy, in recent years.