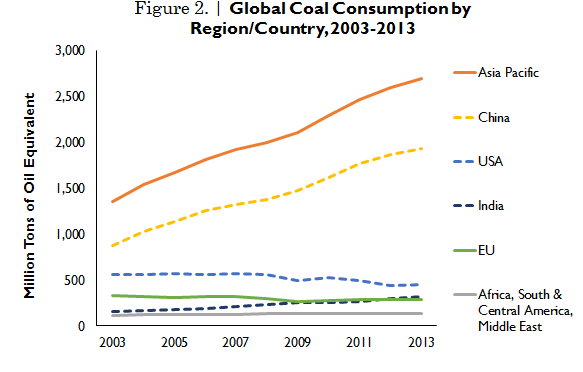 Global demand for coal over the next five years will continue marching higher, breaking the 9-billion-tonne level by 2019, the International Energy Agency (IEA) said in its annual Medium-Term Coal Market Report released today. The report notes that despite China’s efforts to moderate its coal consumption, it will still account for three-fifths of demand growth during the outlook period. Moreover, China will be joined by India, ASEAN countries and other countries in Asia as the main engines of growth in coal consumption, offsetting declines in Europe and the United States.

“We have heard many pledges and policies aimed at mitigating climate change, but over the next five years they will mostly fail to arrest the growth in coal demand,” IEA Executive Director Maria van der Hoeven said at the launch of the book. “Although the contribution that coal makes to energy security and access to energy is undeniable, I must emphasise once again that coal use in its current form is simply unsustainable. For this to change, we need to radically accelerate deployment of carbon capture and sequestration.”

The Executive Director also called for more investment in high-efficiency coal-fired power plants, especially in emerging economies. “New plants are being built, in an arc running from South Africa to Southeast Asia, but too many of these are based on decades-old technology,” she said. “Regrettably, they will be burning coal inefficiently for many years to come.”

Global coal demand growth has been slowing in recent years, and the report sees that trend continuing. Coal demand will grow at an average rate of 2.1% per year through 2019, the report said. This compares to the 2013 report’s forecast of 2.3% for the five years through 2018 and the actual growth rate of 3.3% per year between 2010 and 2013.

As has been the case for more than a decade, the fate of the global coal market will be determined by China. The world’s biggest coal user, producer and importer has embarked on a campaign to diversify its energy supply and reduce its energy intensity, and the resulting increase in gas, nuclear and renewables will be staggering. However, the IEA report shows that despite these efforts, and under normal macroeconomic circumstances, Chinese coal consumption will not peak during the five-year outlook period.

The report’s forecasts come with considerable uncertainties, especially regarding the prospect of new policies affecting coal. Authorities in China as well as in key markets like Indonesia, Korea, Germany and India, have announced policy changes that could sharply affect coal market fundamentals. The possibility of these policy changes becoming reality is compounding uncertainty resulting from the current economic climate.

“Our analysis shows that the price floor provided by production costs has decreased significantly, not only because producers reduced costs by gaining economies of scale, better management and budget discipline, but also due to external factors,” said Keisuke Sadamori, Director for Energy Markets and Security. “Depreciation of local currencies in the main exporting countries has been significant and low oil prices also help, as oil represents a significant share of coal costs, especially in open-pit operations.”

Coal use in OECD member countries is projected to decline in the outlook period, as growth in Turkey, Korea and Japan fails to offset declines in Europe and America. In the United States, retirement of coal capacity and competition from shale gas will lead to a 1.7% decline per year on average during the forecast period. Australia is set to account for the largest growth in exports as Indonesia, driven by higher domestic demand and government policies, slows shipments abroad.

Medium-Term Coal Market Report 2014 is part of an annual series whose other outlooks address oil, gas and renewables. The series also features a report on the market for energy efficiency.

Medium-Term Coal Market Report 2014 can be purchased at the IEA bookshop. Journalists who would like more information or a complimentary copy should contact ieapressoffice@iea.org.