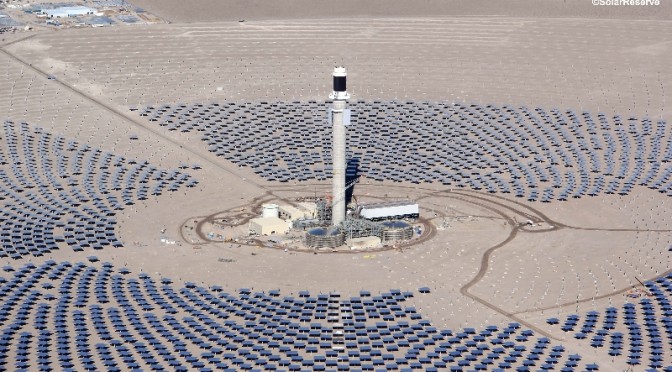 SolarReserve’s 110 MW Crescent Dunes Solar Energy Plant located in Nevada is the first utility-scale facility in the world to feature advanced molten salt power tower energy storage capabilities.  The project has completed construction, is currently in the commissioning phase, and will generate more than 500,000 megawatt-hours per year. This annual output is more than twice that of other technologies per MW of capacity, such as photovoltaics (PV) or direct steam solar thermal. Utilizing next generation storage technology, the project design includes 10 hours of full-load energy storage providing efficient and cost effective storage capabilities for 1,100 megawatt-hours of electricity. The storage technology also eliminates the need for any backup fossil fuels, such as natural gas, which are needed with other solar thermal technologies to keep the system operating during times of reduced solar resource. Nevada’s largest electric utility, NV Energy, will purchase 100 percent of the electricity generated by the Crescent Dunes project under a 25-year power purchase agreement and is expected to dispatch the project to generate solar generated electricity until 12 midnight in order to meet its peak energy demand periods.

“The Crescent Dunes project will set industry standards for solar energy storage and will prove U.S. developed technology to be the world’s leading solution to efficiently and cost effectively store solar energy, so electricity can be dispatched to meet demand whenever it’s needed – day and night,” said SolarReserve’s chief executive officer, Kevin Smith. “The recognition of the project by the distinguished Engineering News Record is an honor as well as a tribute to the project team’s success in building this first-of-its-kind project.”

SolarReserve is joined as investors in the project by ACS Cobra, a worldwide leader in the engineering and construction of power plants and thermal solar facilities, and the equity capital practice of Santander, a global financial services and banking leader. ACS Cobra’s Nevada-based affiliate, Cobra Thermosolar Plants Inc., is constructing the facility as the general contractor while utilizing Nevada and regional subcontractors to perform the work.

In addition to its headquarters in the US, SolarReserve has offices in Chile, South Africa, Turkey, Spain, Australia and the United Arab Emirates, with activities underway in the Middle East, Africa, Australia, China, India and Latin America.