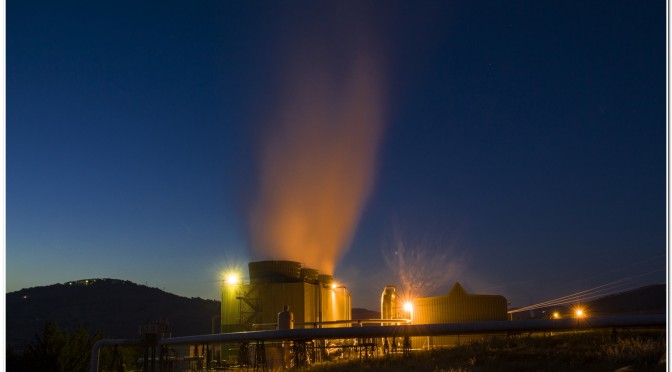 Enel Green Power has begun construction of a plant powered with locally sourced forest biomass that will supplement the output of the “Cornia 2” geothermal plant.

Enel Green Power has started construction at the “Cornia 2” geothermal power plant in the town of Castelnuovo Val di Cecina, in Tuscany, on the first plant in the world that uses biomass to heat geothermal steam in order to increase the energy efficiency and electricity output of the geothermal cycle.

The existing geothermal plant will be supplemented by a small plant powered with locally sourced virgin forest biomass produced within a radius of 70 km from the plant: thanks to the biomass, the steam entering the plant will be heated to raise the initial temperature to between 370°-380° from 150°-160°, thereby increasing net capacity for power generation, thanks to both the greater enthalpy of the steam and the enhanced efficiency of the cycle due to lower humidity in the generation phase.

This plant represents a major technological innovation with virtually no impact on the environment, as it supplements an existing industrial site, maintains the total renewability of the resource and the cycle and in fact combines two renewable energy sources for a form of generation that opens new prospects at the international level.

In this case, 5 MW of capacity from biomass will be added to a geothermal plant that currently has an installed capacity of 13 MW. The geothermal plant’s annual power output will be boosted by approximately 37 GWh. Enel Green Power is investing more than 15 million euros in the project, with construction due to be completed by the first half of 2015.

Overall, the biomass project will avoid the emission of an additional 17 thousand tonnes of CO2 per year. It will also have a major impact on employment, with the direct and indirect creation of 35 to 40 jobs in sourcing the local biomass.

Other benefits may result from the efficient use of agricultural and agro-industrial by-products, from the optimal maintenance of forest resources with the consequent prevention of hydrological risk, from the sustainable development of energy crops and from the production of significant amounts of co-generation heat.

“Thanks to its century-long experience in geothermal energy, Tuscany is already in the future“, said the CEO of Enel Green Power, Francesco Venturini, “Hybrid technologies are the new frontier of renewable energy in our efforts to optimize performance, and this facility, which offers an innovative approach to integrating biomass and geothermal energy, is a replicable model that can open new prospects for the development of energy, the economy and employment for local communities”.