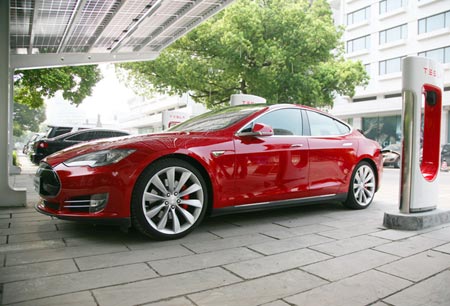 By August, the company had sold 9,582 electric cars with total sales for this year expected to hit the 20,000 mark.

The global electric car market is expected to grow faster than the traditional car market with annual sales of electric vehicles worldwide likely to touch 13 million units by 2020, accounting for 13% of the global total, Shanghai Securities News reports.

In China, the electric car market has seen tremendous growth under new business incentive policies. For the first eight months, 31,137 electric vehicles were produced-a whopping 328% growth year on year-of which 16,276 were all-electric cars, up seven-fold, and 6,621 were plug-in hybrids, up twelve-fold.

In the first half of this year, 20,477 electric cars were sold, a 220% increase from the same period last year.

New energy car sales are expected to get a further boost with the implementation of a tax-free policy for purchasing these vehicles which started Sept. 1.

Furthermore, deputy secretary-general of the State Council, Ma Kai, said recently that the Chinese government will continue to bring forth new polices to support innovative development, quicken the development of batteries for electric cars and help with the organizational restructure of the industry.

The government will also introduce policies to provide subsidies to consumers buying new energy cars from 2016-2020.

According to Wang Cheng, an industry insider, Beijing swiftly issued licenses for the first 1,000 all-electric cars on Sept. 8, and is likely to lower the threshold for entry into the electric car market.