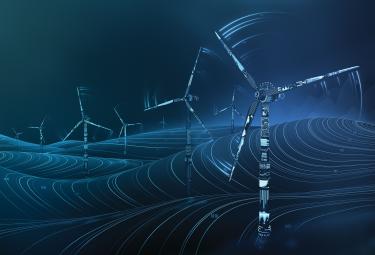 GE (NYSE: GE) today announced that E.ON has achieved up to four percent more power output from the first 283 of 469 GE 1.5-77 wind turbines enrolled in GE’s Wind PowerUp services, a customized software-enabled platform that increases a wind farm’s output by up to 5 percent, taking into account environmental and site conditions. This increased output represents more than 40 GW/h of additional energy production.

E.ON has enrolled a total of 469 wind turbines in the service since GE’s PowerUp services launched in 2013 and, once validated, could reach a projected increase of 87 GW/h of additional energy production across all turbines, or the equivalent of adding 19 GE wind turbines to E.ON’s fleet, based on performance extrapolations. This production increase could be enough equivalent energy to power 8,000 American homes for a year.

“E.ON is always innovating, and we are happy that GE’s PowerUp technology has made some of our best wind farms even better,” said Patrick Woodson, chairman, E.ON North America. “Advancements in wind energy technology, like PowerUp services, will continue to make renewable energy even more competitive in the energy market.”

Watch a video to see more on E.ON’s experience with PowerUp services.

In its first year, GE’s PowerUp services have been selected for more than 1,400 customer units.  PowerUp services work by adjusting performance dials, including speed, torque, pitch, aerodynamics and turbine controls after analyzing site conditions, tailoring and improving the power output of each wind turbine.

PowerUp services are part of GE’s brilliant wind platform, which harnesses the power of the Industrial Internet to analyze tens of thousands of data points on a wind farm every second, driving higher power output, increasing services productivity and creating new revenue streams for customers. It is one of GE’s Predictivity* technologies, leveraging connectivity and advanced analytics, and is an ecomagination qualified product.

E.ON Climate & Renewables (EC&R), headquartered in Essen, Germany, is responsible for E.ON’s large-scale renewable energy activities. EC&R plays a leading role in the development of the renewable industry worldwide and is already active in onshore and offshore wind, photovoltaic and concentrating solar power. E.ON currently operates over 10 gigawatts of renewable capacity including large hydro. Since its formation in 2007, EC&R has already invested more than €9.5 billion, including more than $5 billion in the U.S solar and wind facilities, and will continue to expand the share of renewable energy in E.ON’s power generation portfolio.