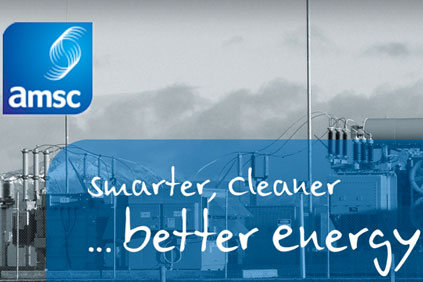 The system in Canada will be used to reduce flicker violations caused by the starting of a motor at a port and rail facility. All systems are expected to be delivered in fiscal year 2014.

In the United Kingdom, Senvion SE (formerly REpower), a wholly owned subsidiary of the Suzlon Group, will use AMSC’s D-VAR system to connect the Strathy North Wind Farm to the grid. The wind farm, which is owned by SSE, is currently under construction and will feature 33 Senvion MM82 wind turbines. The plant is expected to become fully operational towards the end of calendar year 2015.

In the United States, AMSC’s D-VAR system will connect the Route 66 Wind Farm to the Electric Reliability Council of Texas (ERCOT) power market. The Route 66 Wind Farm in Amarillo, Texas, which is currently under construction, will be owned and operated by First Wind, an independent U.S.-based wind energy company. This is AMSC’s second project with First Wind. Mortenson Construction’s Renewable Energy Groups is responsible for the installation of the AMSC system at the Route 66 Wind Farm. The renewable plant, which will be connected through ERCOT’s new Competitive Renewable Energy Zone (CREZ), is expected to generate 150 megawatts (MW) of clean, renewable energy.

In Canada, a D-VAR system will be installed near a port and rail facility to mitigate the voltage flicker caused by the starting of large electric motors at the facility. The D-VAR system is designed to maintain the voltage within acceptable limits set by the local utility.

“AMSC’s D-VAR STATCOM system enables renewable energy plants to safely and efficiently connect to the electric grid. It also helps utilities to enhance grid utilization on existing power systems and protects industrial facilities from voltage instability,” said Daniel P. McGahn, President and CEO, AMSC. “These most recent projects in the United Kingdom and United States indicate forward momentum in two of our core wind markets. The installation in Canada demonstrates our continued efforts to diversify the D-VAR customer base further into industrial applications.”

AMSC generates the ideas, technologies and solutions that meet the world’s demand for smarter, cleaner … better energy. Through its Windtec™ Solutions, AMSC provides wind turbine electronic controls and systems, designs and engineering services that reduce the cost of wind energy. Through its Gridtec™ Solutions, AMSC provides the engineering planning services and advanced grid systems that optimize network reliability, efficiency, and performance. The company’s solutions are now powering gigawatts of renewable energy globally and enhancing the performance and reliability of power networks in more than a dozen countries. Founded in 1987, AMSC is headquartered near Boston, Massachusetts with operations in Asia, Australia, Europe and North America.