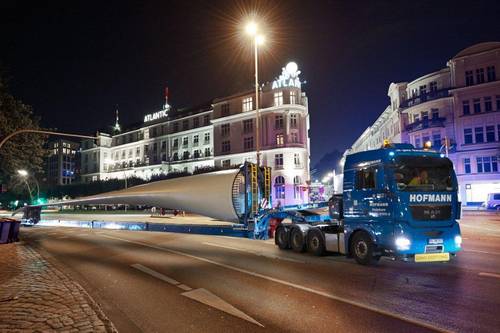 Special highlight will be the 64.4-meter long rotor blade of the light wind turbine N131/3000 – one of the largest rotor blades for onshore wind turbines – which will be presented as an exhibit to the public for the first time.

On the yard of the Hamburg Messe, next to the TV Tower, visitors can also convince themselves of the performance capability of the second generation of rotor blade adapters by the TII group and gain first-hand wind energy and logistic know-how. During regular demonstrations at the trade fair, the giant N131/3000 rotor blade will be moved upward to an angle of 70 degrees.

Thanks to the adapter, the large-dimensioned N131/3000 rotor blades can be transported along narrow curves and past obstacles. This allows the rotor blade to be transported in particular rough terrains. Collisions with obstacles such as trees or buildings can be avoided. Thus, the position of the rotor blade can be adjusted to the road with no loss of time, even on hillsides or serpentine roads. A wind sensor warns when the configurable wind speed is exceeded.

The new rotor blade adapter can be installed and operated on platform trailer combinations as well as self-propelled modules. Thanks to the quick-release plate, a flexible transport of various rotor blades and thus a high efficiency level is ensured.

The N131/3000 turbine is designed for locations with light wind speeds. With a nominal output of 3.0 MW, its capacity is 25 percent greater than its predecessor’s. Thanks to the design optimization of the rotor blade, the sound power level could be reduced to 104.5 dB (A). The N131/3000 will be installed for the first time in the fourth quarter of 2014. Serial delivery of the system will start in 2015.

As one of the leading technological providers of turbines in the megawatt class, Nordex benefits from the global trend to larger wind turbines. The company’s product range includes some of the largest serial wind turbines in the world – the Gamma Generation (N90/2500, N100/2500, and N117/2400).  To date, over 2,600 turbines of this platform have been installed around the world.  This experience with multi-megawatt turbines gives Nordex a decisive lead over most of its competitors. With the Delta Generation, Nordex is now offering the fourth generation of its proven multi-megawatt platform (N100/3300, N117/300 and N131/3000). Nordex has installed a total of around 6,000 turbines with an aggregate capacity of more than 10,000 MW all around the world. With exports accounting for more than 80 percent of its business, Nordex SE plays a key role in international high-growth regions. The company has offices and subsidiaries in 22 countries around the world. The group has a total global headcount of over 2,700 employees.

Transporters from SCHEUERLE, NICOLAS and KAMAG are recognized across the world for their advanced technology and special product quality. Reliability in daily use, high load capacity and a long working life make the vehicles a very important component of modern logistical operations. The history of vehicle technology for heavy transport vehicles is closely connected with the names SCHEUERLE, NICOLAS and KAMAG. The companies, belonging to the company group of the Heilbronn entrepreneur Otto Rettenmaier, combine tradition and innovation. The TII Group – Transporter Industry International – is world market leader in the development and manufacture of heavy transport vehicles with payloads of up to 20,000 tons.