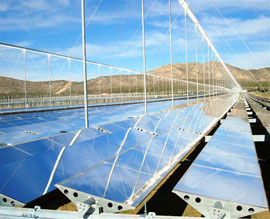 Novatec Solar and BASF have successfully commissioned a solar thermal demonstration plant based on a new type of molten salt technology, known as DMS technology.

Novatec Solar and BASF have successfully commissioned a solar thermal demonstration plant based on a new type of molten salt technology, known as direct molten salt or DMS technology. The plant is located on the site of the solar-thermal power plant PE1 in southern Spain. The innovative feature of the new plant design is that the solar collector uses inorganic molten salt as heat transfer fluid. Most solar thermal power plants currently use heat transfer oils, which have a limited qualification temperature. Using inorganic salts as heat transfer fluid allows operating temperatures above 500°C, resulting in a significant increase in power yield.

The thermal energy can  either be directly converted into electrical power or be stored in large molten salt tanks during periods of low demand. This stored energy can be kept in reserve for times when production is low, for example when the sky is overcast. Solar thermal power plants with storage systems can supply electricity as and when required, which helps to ensure grid stability.

Over the coming months, the demonstration collector will be used to experimentally simulate a large number of different operating conditions and study the impacts on long-term operability. The results will be used to develop the next generation of solar thermal power plants.

“The successful commissioning and the initial results of the DMS demo plant have confirmed our expectations of the technology. We are delighted that we can now offer solar thermal power plants with molten salt technology and thermal storage on a commercial basis,” says Andreas Wittke, CEO of Novatec Solar.

At the joint test plant, BASF and Novatec Solar use molten salt as heat transfer and storage medium in a Fresnel collector. This type of collector, an alternative to parabolic trough or solar power tower technology, uses flat glass reflectors. A Fresnel collector consists of almost flat reflectors mounted in rows on a steel structure. The reflectors concentrate direct sunlight onto a receiver, through which the molten salt is pumped. This has the effect of heating the salt to temperatures in excess of 500°C.

For several years BASF has been researching and developing heat transfer fluids based on inorganic salts and process control concepts for solar thermal power plants. The company also has over 30 years’ experience in the operation of so-called salt bath reactors, chemical plants that also use molten salt as a heat transfer fluid for process control. Besides the use in chemical plants, anorganic salts can be used reasonably in any application that requires the transport or storage of heat.

“Our knowledge of salt chemistry and the new technology concepts are contributing to a significant improvement in the efficiency of solar thermal power plants,” says Kerstin Dünnwald, Head of Business Management for Inorganic Chemicals at BASF. “With our portfolio of high-purity inorganic salts and our expertise in their application, we help our customers operate this type of plant safely and efficiently.”

The DMS demonstration collector project is supported by the German Federal Ministry for Economic Affairs and Energy (BMWi) following a decision by the German parliament.

Novatec Solar is a leading technology supplier for concentrating solar power, specializing in the production, supply, and turnkey delivery of solar steam generators based on Fresnel collector technology. These are suitable for a wide range of applications such as power generation in solar thermal power plants and the production of process steam for industrial processes, for example in more cost-efficient oil production. Solar technology from Novatec Solar generates steam at temperatures of up to 550°C. Novatec Solar constructed the world’s largest Fresnel solar power plant, PE2, in Spain. More information about Novatec Solar can be found online at www.novatecsolar.com

At BASF, we create chemistry – and have been doing so for 150 years. Our portfolio ranges from chemicals, plastics, performance products and crop protection products to oil and gas. As the world’s leading chemical company, we combine economic success with environmental protection and social responsibility. Through science and innovation, we enable our customers in nearly every industry to meet the current and future needs of society. Our products and solutions contribute to conserving resources, ensuring nutrition and improving quality of life. We have summed up this contribution in our corporate purpose: We create chemistry for a sustainable future. BASF had sales of about €74 billion in 2013 and over 112,000 employees as of the end of the year. BASF shares are traded on the stock exchanges in Frankfurt (BAS), London (BFA) and Zurich (AN). Further information on BASF is available on the Internet at www.basf.com.