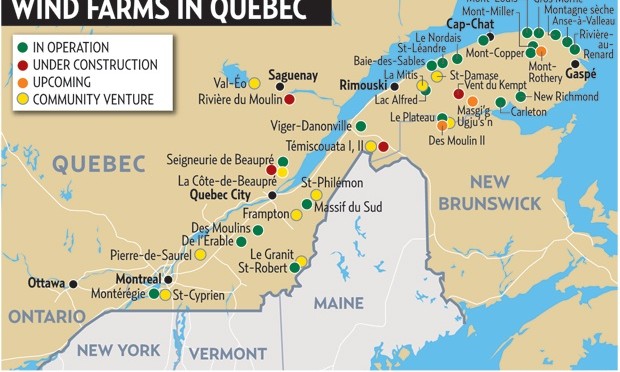 At least one wind power executive rejoiced Thursday at the announcement that Quebec is forming a task force on how best to tap the province’s commercial wind potential.

“I’m very confident this is a good announcement and there will be a lot of good coming out of it,” said Eva Lotta Schmidt, business development manager for Enercon Canada Inc., part of the German group Enercon, the world’s fourth-largest wind-turbine maker.

Arcand said the 15-member working group would include “probably about 10 or 12 people” from industry — mostly unidentified as yet.

Schmidt said that “obviously, we’d like to be part of it — I think everyone would like to participate. It’s great to hear about a forum to exchange (ideas) with the government. It’s great to hear the wind industry is a good part of the Quebec economy, creating good jobs.”

Jean-Frédérick Legendre, Quebec director of CanWEA, whose group will be part of the task force, praised the initiative’s “structured approach.”

Arcand said that “it’s time for the government to rethink what needs to be done, what are the challenges of this industry.”

“How come, for instance, construction costs of wind towers are higher in Quebec than in Ontario? What can we do about it? What kind of rules can we change to improve their efficiency? What will happen in the future? What are the chances of companies (in the business) to export more toward major markets?”

“These are the questions that need to be addressed by this group.”

The report’s conclusions will “be reflected in the budget, which will probably be in March, and will form part of the new energy policy I will be announcing, probably in the fall of 2015.”

Arcand said the government is willing to help, but that “it’s also clear that the industry must — more and more as years go by — become more self-sufficient.”

Wind power players have received significant subsidies over the years, but Legendre noted that “this industry has developed over only one decade — and by the way, also survived a change in government.”

Wind power firms have invested $10 billion in Quebec over that time, he added, and have created 5,000 jobs, as well as the largest supply chain in Canada.

Schmidt said that wind energy “is the only industry in Quebec where regions are actually supporting jobs in Montreal. Normally, it’s the other way around.”

The report will allow business to draw up serious business plans knowing in advance what their energy rates will be, what amount of power they can export and how much can be produced for the domestic market, she noted.

A report drafted for the previous Parti Québécois government, which Arcand called “a very well-done report,” questioned the feasibility and economics of wind power.

“But in life, one can be very pessimistic or one can have a more upbeat vision.”

Hydro-Québec has a 4-per-cent surplus, but Arcand noted that a surplus can quickly turn to a deficit.

At a meeting with New England governors last week, Premier Philippe Couillard heard a litany of complaints from them about their energy costs last winter, a brutally cold and long season.

“So I don’t need to tell you that the governors clearly told Premier Couillard that they were looking at (buying power from) Hydro-Québec.”

Reports that Couillard cast doubts on phase III and IV of La Romaine, a huge hydro project in northern Quebec destined mostly for export, were completely false, he said.