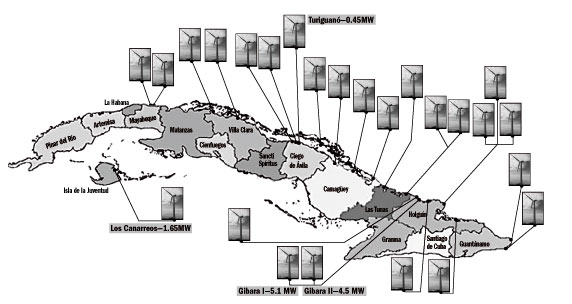 Cuba is currently fostering renewable-energy projects to change the structure of its energy sources, reduce dependence of imported fossil fuels, costs and environmental pollution. Minister of Energy and Mines Alfredo Lopez reported today to the parliamentary commission of Industry, Constructions and Energy that investments are being prepared and negotiations developed for the year 2015, regarding renewable energy sources.

He mentioned the construction of bioelectric power stations that generate 755 megawatts (MW), using sugar cane, bagasse and sicklebush, as well as more than 600 MW that wind energy will contribute in northern coastal areas in the provinces from Ciego de Avila to Guantanamo.

Photovoltaic solar energy will be also used to generate 700 MW along the national territory, besides 56 MW to be contributed by hydro energy, making maximum use of the country’s hydraulic potential.

With the purpose of improving the efficiency of the electrical system in the country, the official said they are making efforts to build four power generating stations of 200 MW each. Three of them will be located in Santa Cruz del Norte and one in Mariel.

The sources for financing for the investments will have a proper combination of Government credits and direct foreign investment.