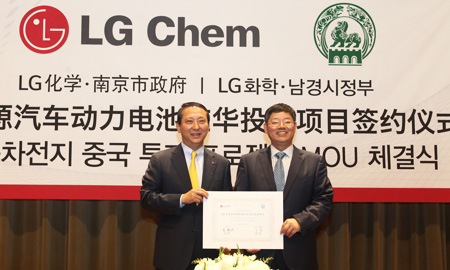 LG Chem said Wednesday that it has teamed up with two state-run companies in China to build its first electric-vehicle battery plant there.

The plant will be operational by the end of 2015 with an annual production capacity reaching 100,000 battery packs for electric vehicles when completed.

LG Chem declined to provide financial details such as total investment for the plant, though industry officials and analysts say the factory will cost $500 million with LG accounting for half. The other half will be shared by the Chinese firms.

LG said the Nanjing factory will have “vertically integrated” business structure, which means that the facility can handle all key manufacturing processes from cells to modules and packs.

The batteries to be manufactured at the facility will be sold to Chinese and global carmakers that have operations in the country, according to the statement.

“Considering the locations of Chinese car manufactures, we reached a consensus that Nanjing was the best location,” said LG spokesman Woo Byeong-min.

LG said Chinese authorities offered tax and administrative benefits for the mega project. By 2020, LG expects to generate more than 1 trillion won in revenue just from the plant.

The announcement comes as Chinese President Xi Jinping, who will hold a summit with the President Park Geun-hye, will meet business leaders at the Hotel Shilla over pending issues Friday.

In a related note, a local steel giant POSCO will sign a memorandum of understanding (MOU) with Chongqing Iron and Steel to establish a steel plant in China.

Also, SKC will boost its strategic tie-up with TCL of China. TCL is a leading Chinese consumer electronics manufacturer with its revenue last year reaching more than 14 trillion won.

LG Chem already runs battery plants in Ochang and Michigan in the U.S.

It has secured more than 20 global carmakers as its clients including General Motors and Volvo.

That means, according to analysts, LG Chem is going to see additional business opportunities to grow its battery business.

“Profit at LG Chem’s battery business division will improve throughout this year. The market for car batteries is promising and highly lucrative as new order prevails in the industry,” said E-Trade Investment analyst Han Seong-jae.