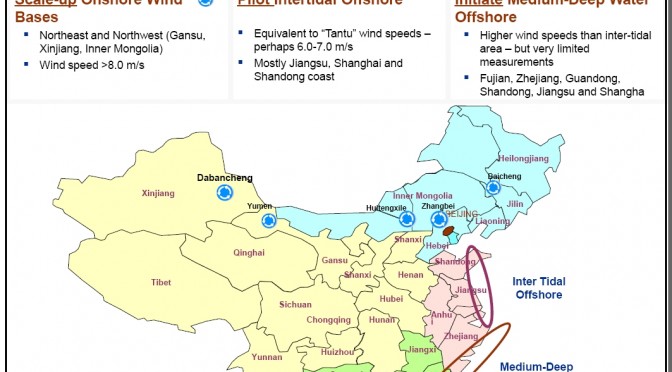 According to the National Energy Bureau, China will construct five gigawatts of offshore wind power projects by 2015, representing 5 percent of its total wind energy installed capacity.

The pricing policy applies to projects with no-bid contracts that will be in operation before 2017, according to a National Development and Reform Commission (NDRC) statement.

The on-grid price (tax-included) for intertidal wind power projects is 0.75 yuan (0.12 U.S. dollar) per kwh, while that for coastal schemes is 0.85 yuan per kwh, the NDRC said.

For projects to be put into operation after 2017, the pricing scheme will be formulated separately based on changes in technology and construction costs, as well as the circumstances of bidding.

The NDRC added that it encourages market competition, including bidding for concession contracts, in deciding the proprietor of offshore wind power farms and on-grid prices. But the bidding price shall be no more than the government-set price for the same type of projects.

Meanwhile, China has 400 megawatts of offshore wind installed capacity already in production, which the NDRC described as “an initial stage of development”.

Previous estimates showed the country has up to 750 gigawatts of exploitable wind resources in the sea, three times that of its land-based wind resources. These offshore wind resources are found off the eastern and southern coasts, near large economic centers.