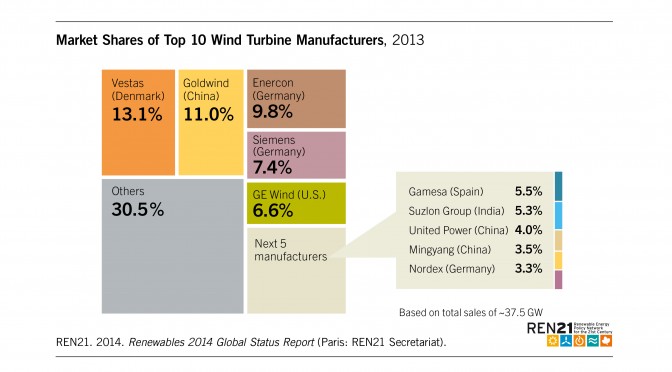 Increasing need to replace conventional sources of energy with renewable energy is expected to drive the market for wind power generation over the next decade. The global market for wind power has experienced robust growth since the last two decades. Governments across various nations have been supporting the use of renewable energy sources including solar power, hydro power, wind power and biomass. Regulatory bodies also, in order to reduce carbon footprints and reduce reliance on conventional energy sources have been promoting power generation using wind turbines.

The global market for wind power generation has been experiencing excellent growth rates since the last decade and will continue to do so over the forecast period. Europe emerged as the leading market for wind power owing to favorable regulatory policies mainly in EU-27 countries. Europe’s framework legislation and its target to reduce carbon footprints by 2020 are expected to ensure continuous growth of wind power market in the region. In addition, extension of production tax credit as a part of fiscal cliff package by the U.S. Congress is expected to be a key factor driving the regional market for wind power. U.S. saw a record number of capacity additions in 2012, as wind power emerged as the largest source of new electricity generation by accounting more than 40% of new capacity added.

However, huge growth opportunities lie in Asia Pacific on account of favorable regulations in countries such as China and India. Asia Pacific is expected to overtake Europe to become the leading wind power market in terms of cumulative installed capacity by the end of 2020. Wind power accounted for a 2% of the total electricity produced in China up from 1.5% in 2011. In addition, Middle East and Africa have been taking rapid strides in the global wind power market and is expected to match Central and South America in terms of cumulative installed capacity by 2020.

Europe was the largest consumer of wind power till 2012 due to large regulatory support from European Union and national government. Asia Pacific overtook Europe in terms of volume of wind power consumed in 2013. Asia Pacific region accounted for 37.4% of total market volume in 2013. Asia Pacific market was closely followed by Europe.Middle East and Africa is expected to be the fastest growing regional market for wind power at an estimated CAGR of 44.8% from 2014 to 2020.Increasing concerns about conventional energy sources has helped this market to grow. China has been a key consumer of wind power which was followed by United States and Germany.  European market is expected to grow at a sluggish rate due to maturity of the market.