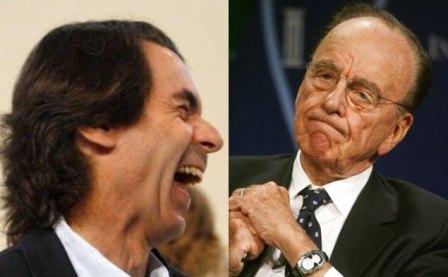 Here is an admission. For more than two years, over two stints, I wrote a weekly column on green energy for The Australian newspaper, called Greenchip.

It appeared prominently on the business pages, and on no occasion was I ever instructed by any editor to take a certain angle, and my copy was never changed to convey another meaning – although one sub-editor did choose the word “seaweed” in a story about algae fuels.

That’s the way it should be. And possibly the way it still is. But I make mention of it now because the position of the Murdoch media towards renewable energy has become a major issue: It appears designed to bring a multi-billion dollar industry to a halt, and apart from ideological reasons, or sympathy with vested interests, it is not clear why.

Certainly, it is not based on the facts. Some of the reporting on renewables from the Murdoch global network has been laughable, such as the assertion by one Fox News reporter that solar could never work in the US because it didn’t have as much sun as Germany.

Most of it, though, has simply been unbalanced, and ill-informed, such as its numerous stories about the supposed costs of wind energy, its supposed health impacts, and the repetition of the myth that it serves no useful purpose and does not reduce emissions – claims I had debunked in one of my last Greenchip columns.

(Just for the record, for new build generation, wind is already cheaper than coal and gas in most countries, including Australia, and solar is quickly catching up. Even the government’s own economic forecaster accepts that, and so do utilities in Europe, and the US. Wind and solar energy is deemed too expensive because it is sometimes compared with wholesale electricity market prices which have been forced down by massive overcapacity. Renewable energy mechanisms are designed to force out dirty generation, put a value on its environmental benefits, and facilitate a technology with a high capital cost, but zero fuel cost. Incumbent markets have historically favoured low capital cost, high fuel cost sources).

And some of the commentary from Murdoch media is just insistent, unsubstantiated, and plain wrong – such as the air time given to right wing commentators such as Alan Moran, Judith Sloan, Terry McCrann, and Henry Ergas, just to name a few, who give inflated costs of both renewable energy and the renewable energy target, and refuse to believe that wind or solar can have a role to play.

Now, there is no doubt that this position has become the Murdoch media’s official line. On Friday, not for the first time, The Australian ‘s main editorial railed against the renewable energy target. This time, though, it relied exclusively on hotly contested figures provided by the mining lobby group in its submission to the RET review panel.

There is growing despair in Australia about the RET review process, which seems clearly conflicted. As we reported last month, the work of the panel’s modeler, ACIL Allen, has been used by the most vocal opponents of the RET, EnergyAustralia, as has the work of panel member Brian Fisher in submissions from the oil and gas industry. Even the appointment of a vocal climate skeptic to head a panel reviewing a mechanism that is designed to assign a value to the environment is a conflict of interest.

The Australian editorial also relies on long-time renewable critic Keith Delacy, a mining company director, who says it is “plain crazy” to have renewable energy schemes. Delacy also argues, absurdly, that renewables have “no place” in a modern economy. One wonders, then, why the major economies – US, China, Japan, Germany, France, and numerous countries in Latin America, Asia, Africa, the Middle East, the rest of Europe and even small islands – are pushing so hard to lift their share of renewables.

But The Australian did not have to look far to find some common sense about the issue.

In its own print edition, about 10cm to the left as the crow flies, was an important opinion piece by Innes Willox, the CEO of the Australian Industry Group, which served to dispel some of the most common myths about the RET.

He identified the fact that the biggest contributors to rising prices are the network costs and soaring gas prices (the full effect of which Australian consumers have not experienced yet) – and dropping the renewable energy target would deliver no benefits apart, maybe, to some coal fired generators.

“Reducing the RET would certainly ease difficult conditions for other generators,” Willox writes. “But there doesn’t seem to be much in it for most energy users.”

Willox’s position is typical of many technology-neutral business leaders, who now understand that renewables are keeping wholesale prices much lower than they would otherwise be, that lower wholesale prices are offsetting the costs of the program, and that renewables – be they the wind and rooftop solar being deployed now, or the emerging technologies encouraged by the likes of ARENA and the CEFC – are a critical launch-pad for Australia’s inevitable transition to a low-carbon economy. And they work.

And they realise that locking the country into a fossil fuel future includes huge price risks, as Ross Garnaut pointed out last week, and as Climate Change Authority chairman Bernie Fraser has lamented before. Moves to delay that transition are simply a move to hold the rest of the economy to ransom for the benefit of a powerful few. Newspapers should rise above that narrow self interest. Or at least get properly informed.

For that reason, it is worth reading Willox’s piece in full.

THE costs, benefits and future of the renewable energy target are the issues of the moment in Australia’s energy price debate.

Australian industry, jobseekers and consumers are feeling real pain from high energy costs, and reducing these pressures should be a high priority. Should the RET be cut?

There are no simple answers. The RET is a complex beast, legislated to achieve bipartisan aspirations on renewables. Investment certainty, sunk costs, transfer costs and the costs of alternatives all have to be factored in. What is good for some sectors is disastrous for others.

As we have argued after wide consultation across industry, current evidence suggest energy users would lose as much as they gain from deep reductions in the RET.

But the RET is just one element of many energy debates and reviews this year. Underneath it all are a few simple realities: retail ­prices for electricity and gas keep going up; domestic demand is dropping, partly because major energy users are simply closing down; the future for energy investment is high risk.

Because we were close to rich resources, Australia once had a competitive advantage in competitive energy. We have blown it. How do we get it back?

Whatever your view about the RET, two other factors are responsible for most of the energy price pressure we face today.

First is a massive recent rise in electricity network costs. This was driven in part by real investment needs, but also by flawed regulations and excessive demand forecasts. As a result, retail electricity prices have soared even as weak demand has depressed wholesale prices.

Second is the ongoing tripling in wholesale gas prices driven by liquefied natural gas exports and the willingness of key state governments to leave gas in the ground and turn their back on development opportunities.

More can be found here.