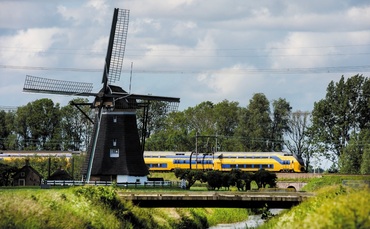 Railway signs deal to source 100 per cent of electricity for its trains from wind power by 2018.

The country currently has 2.7GW of wind power capacity in operation, most of which is onshore, and aims to reach 4.45GW by 2023.

Dutch trains will start running on wind energy from next year and the country’s entire rail network could be fully powered by green electricity by 2018.

Under the terms of a new contract announced last week, utility Eneco is set to supply the Netherlands’ train system with 1.4TWh of electricity from domestic wind farms, as well as installations in Belgium and Scandinavia.

The prospective supplies are equivalent to the amount of electricity used by Amsterdam residents in a year.

Under the terms of the deal, which was signed with the VIVENS co-operative, an energy procurement joint venture that includes Netherlands Railways (NS), Veolia, Arriva, Connexxion and rail freight operators, half of NS electric trains will run on green power in 2015, rising to 70 per cent the following year, and 95 per cent in 2017. The goal is that by 2018 100 per cent of trains will run on renewable energy. The contract expires in 2025 and is thought to be the largest green energy contact yet signed in the Netherlands.

NS claims eight out of 10 passengers consider it important for rail companies to switch to green power. Since 2005 it claims to have cut electricity consumption per passenger kilometre by 30 per cent since 2005 and says the deal will reduce carbon emissions for each of its 1.2 million daily passengers from 30 grams to zero.