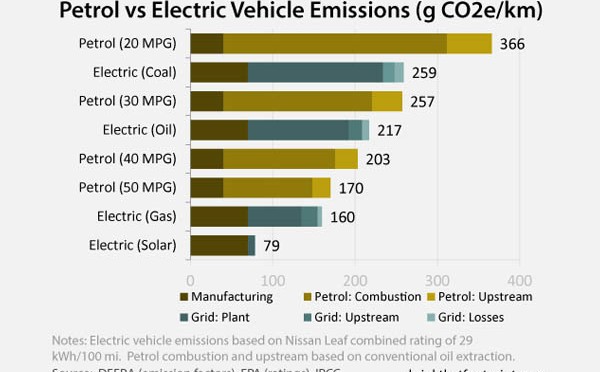 Power that electric car with coal and its somewhat better than gasoline; power with wind power or solar energy and there’s no comparison.

A few months back I did a post called The World’s 7 Greenest Vehicles. It only included one car. Since then a few readers have emailed to ask if I could do a similar comparison, but for cars only. So here’s a very brief guide to vehicle emissions.

In the graph above I’ve compared the full vehicle emissions of four petrol cars (20, 30, 40 and 50 MPG) to that of an electric vehicle using four different types of electricity (coal, oil, gas and solar). In each case I include the emissions from vehicle manufacturing plus the full scope of petrol and electricity emissions. What a wonk might call well-to-wheels plus manufacturing.

The results are pretty clear. The better the fuel economy of a petrol car the lower its emissions. For the electric car the major difference is the source of electricity. The lowest emissions by a distance is the electric car using solar electricity. I’ve chosen solar (45 g CO2e/kWh) because there is high co-ownership of solar and EVs, but the emissions would be just as low using hydro, nuclear, wind or any other low carbon electricity.