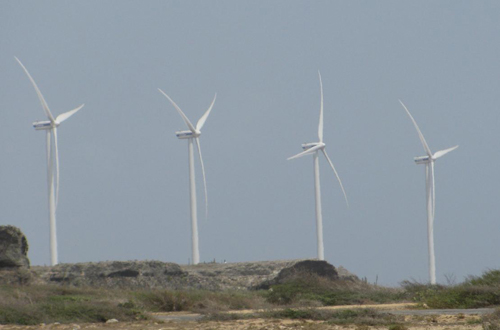 With the Dutch Caribbean leading the way, more and more wind farms are popping up all over the Caribbean as part of a much-needed green energy push. Here is a list of some of the wind farms operating in the region today.

Aruba’s now almost five-year-old wind farm accounts for as much as 20 percent of the island’s energy, with an output of 30 megawatts. Aruba is planning to reach 100 percent renewable energy by 2020.

Curacao was one of the region’s wind farm pioneers; today the Tera Kora farm, one of several wind farms on the island, produces 15 MW of energy.

The Wigton Wind Farm in St Elizabeth, the first in Jamaica, has an output of 21 megawatts derived from 23 wind turbines. It’s been in operation since 2004.

The tiny Dutch Caribbean island has a 12-turbine, 24-megawatt plant located just outside of the Washington Slagbaai National Park.

Guadeloupe is another green energy pioneer in the Caribbean, with the Petite Place wind farm located on the island of Marie Galante with 25 turbines. It produces about 30 percent of the island’s total energy needs, in fact.

The Los Cocos wind park in the area of Barahona includes 40 wind turbines and first launched operations three years ago. It’s part of a major wind push by the Dominican Republic.

Nevis may be small, but it is looking to become a major green player in the region. The WindWatt farm has eight turbines, producing 2.2 megawatts of energy.

Yes, a wind-powered hotel. The Peter Island Resort & Spa in the British Virgin Islands has two wind turbines of its own, a mini wind-park producing 500 kilowatts of energy.