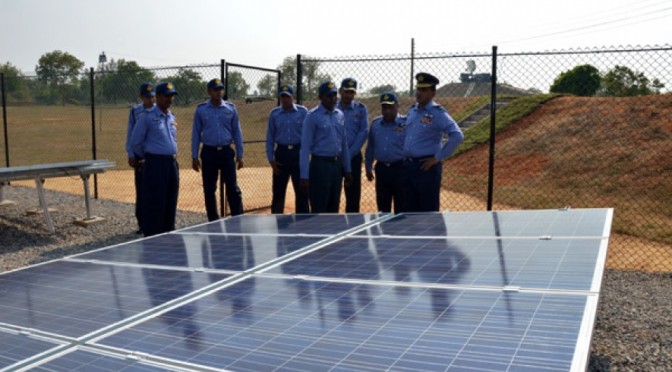 Based on a concept of  the Secretary to the Ministry of Defence and Urban Development  Gotabaya Rajapaksa, a newly constructed 20Kw solar power plant at the SLAF Station Palavi was declared open  by the Director Civil Engineering of the SLAF Air Vice Marshal C.R. Gurusinghe recently.

This Solar power plant will result in a reduction of more than 10% of the monthly consumption from the national grid of the whole camp  and is a good investment for Sri Lanka Air Force.

This event coincided with  the commissioning of two other solar energy projects, one at 2ESR Army camp, Anuradhapura and a second at North Central Naval Headquarters, Punewa.

Commanding officer SLAF Station Palavy Group Captain Indika Weerarathna, Officers and other ranks of the Station were also present at the ceremony.