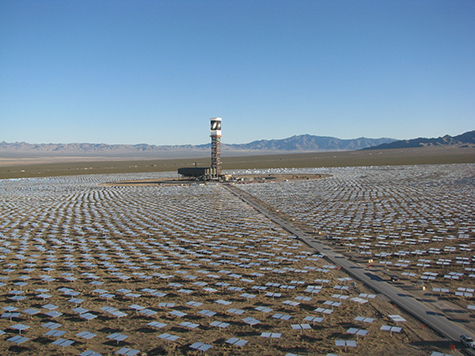 NRG Energy, Inc. (NYSE:NRG) through its subsidiaries including NRG Yield, Inc. (NYSE:NYLD) and NRG Solar, one of the nation’s largest solar developers, now owns and operates more than 1,200 megawatts (MW) of solar capacity. Through these facilities, NRG helps power nearly one million homes at full output with clean, renewable solar energy, which is helping reinvent the US energy ecosystem.

“The completion of our most ambitious projects yet, and the commercial availability of the clean power they produce, clearly positions NRG as one of the largest and most progressive companies in the energy space today,” said Tom Doyle, President, NRG Solar. “As we look forward to 2014 and beyond, we’ll continue to help reshape the US energy landscape with our thriving renewable energy portfolio, as well as looking at more opportunities outside the US.”
NRG Solar’s portfolio of thermal and photovoltaic (PV) projects has more than doubled since the end of 2012. These projects use innovative technology and construction processes to achieve world-class results. NRG Solar’s four largest projects have all achieved full completion in the past 10 months:
In 2014, NRG has completed solar installations at four NFL stadiums – FedExField, MetLife Stadium, Lincoln Financial Field and Patriot Place at Gillette Stadium, with a fifth under construction at Levi’s Stadium in California. Later this year, NRG will also be completing work on the Community project in California’s Imperial Valley as well as a rooftop installation for MGM’s Mandalay Bay Convention Center in Las Vegas. Work will also begin on three Starwood Resort and Hotel properties in Scottsdale, Arizona; Maui, Hawaii; and on the island of St. John in the US Virgin Islands.
In an effort that began with NRG’s philanthropic efforts in Haiti, NRG has continued to develop opportunities outside of the US. Earlier this month, the company announced the groundbreaking of a 25 MW installation called Dandan that will be Guam’s first solar power plant, and last month announced an agreement with Virgin Limited Edition to power Necker Island with a renewable energy-driven micro-grid solution.
As a whole, the solar electric market continued its upward trajectory in 2013. In the US 4,751 MW of solar PV was installed in 2013, up 41% over 2012 and nearly 15 times the amount installed in 2008. Twenty-nine percent of all new electricity generation capacity added this year in the US came from solar – with seven states getting 100% of their new generation from solar. California, where NRG Solar is headquartered, leads the nation in installed solar generation with 5,231 MW.
According to the Solar Energy Industries Association (SEIA), a new solar project is installed in the US every four minutes, and the nearly 13,000 MW of solar energy generated on American soil displaces approximately 12.6 million metric tons of carbon annually, the equivalent of removing 2.6 million cars from the road. The industry is on pace for another record year, with close to 6,000 MW of PV and nearly 900 MW of concentrating solar power (CSP) scheduled to come online in 2014.
About NRG and NRG Solar
NRG is leading a customer-driven change in the U.S. energy industry by delivering cleaner and smarter energy choices, while building on the strength of the nation’s largest and most diverse competitive power portfolio. A Fortune 500 company, we create value through reliable and efficient conventional generation while driving innovation in solar and renewable power, electric vehicle ecosystems, carbon capture technology and customer-centric energy solutions. Our retail electricity providers – Reliant, Green Mountain Energy, Energy Plus and NRG Residential Solutions – serve more than 2 million residential and commercial customers throughout the country.
http://www.helioscsp.com/noticia.php?id_not=2428
Concentrated Solar Power, Concentrating Solar Power, CSP, Concentrated Solar Thermal Power, NRG Energy, solar power, California, U.S., solar energy, BrightSource Energy, Ivanpah,