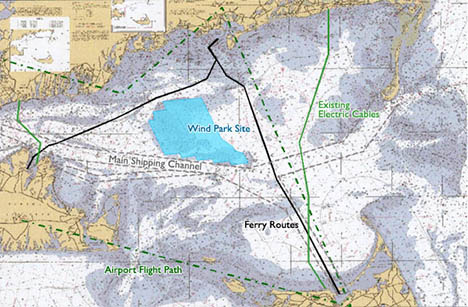 Marking another major Cape Wind financing milestone, Cape Wind and The Bank of Tokyo-Mitsubishi UFJ, Ltd. (BTMU) announced today they had added Natixis and Rabobank to serve as the project’s Lead Arrangers, to work with BTMU to structure and arrange the syndication of the senior debt financing to additional lenders.

The Lead Arrangers are expected themselves to make significant commitments which, together with EKF, would provide more than $1 billion to Cape Wind’s debt financing upon satisfactory completion of the banks’ approval process according to Cape Wind spokesman Mark Rodgers..

Ted Roosevelt IV, Managing Director at Barclays, Cape Wind’s Financial Advisor added, “This is one of the key steps in completing the financing package for the construction of the Cape Wind Project.”

Comments from the lenders

“We are pleased that Natixis and Rabobank will join us in this landmark transaction,” said Takaki Sakai, Project Finance Director of BTMU. “Further, there is considerable interest in Cape Wind among other commercial banks active in project financing, and we expect to complete the commercial bank syndication in the near future,” Sakai continued.

“Cape Wind is a good fit for Natixis considering our prior participation in other offshore wind projects and we believe the market is strong for additional commercial banks to participate,” said Olivier Delay, Managing Director & Head of Aviation, Export and Infrastructure, Americas for Natixis Wholesale Banking. “Cape Wind is a carefully sited project that minimizes weather risks,” Delay added. Natixis, part of Groupe BPCE, the second largest banking group in France, has helped finance offshore wind projects in the Netherlands and Germany.

“Rabobank is pleased to take this step forward in the financing for the Cape Wind project,” said Thomas Emmons, Managing Director and Head of Project Finance for Rabobank in the Americas. “We have closely followed Cape Wind for some time and are enthusiastic about moving forward with the mandate to line up financing commitments,” Emmons added. Rabobank, a Netherlands-based global financial services provider, is a leading financier in the North American and European renewable energy sector and has financed numerous offshore wind projects in the Netherlands, Belgium, Germany, and the United Kingdom.

Earlier this month Cape Wind and the Federal Government successfully won the four legal cases in Federal Court that were challenging Cape Wind’s permit from the Department of the Interior.

Cape Wind will be America’s first offshore wind farm and will help catalyze a domestic offshore wind industry and related supply chain. Cape Wind has long term Power Purchase Agreements with National Grid and NSTAR, the two largest electric utilities in Massachusetts. Cape Wind is the first U.S. offshore wind project to be fully permitted, and to have been issued a commercial lease and received approval for its Construction and Operations Plan by the U.S. Department of Interior. Cape Wind is currently in its financing phase. For more information, visit: www.capewind.org.