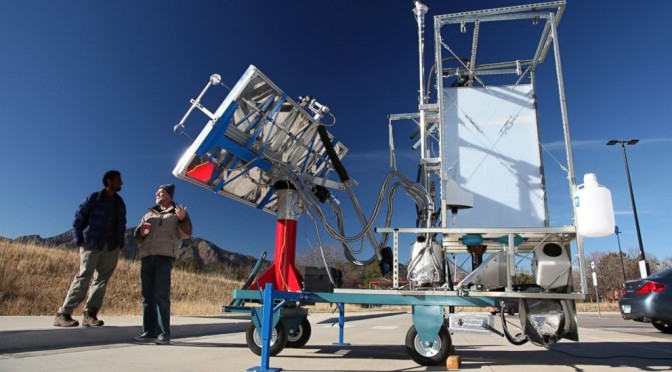 A waterless toilet powered by the sun and developed by American scientists, and a toilet that uses water from air and has been developed by a Kerala-based research company, are among technologies to be unveiled in Delhi later this month.

The innovations are among 16 from across the world funded by a Bill and Melinda Gates Foundation initiative to generate ideas for sustainable sanitation for the 2.5 billion people worldwide without access to safe or affordable sanitation.

The waterless toilet uses concentrated solar energy to turn human waste into biochar, a high-grade charcoal, said Karl Linden, the project’s principal investigator and a professor of environmental engineering at the University of Colorado in the US.

“Biochar is a valuable material. It has good water-holding capacity and can be used on farms to hold in nutrients and bring more stability to soils,” Linden said.

“A soil mixture containing 10 per cent biochar can hold up to 50 per cent more water and increase the availability of plant nutrients.”

Biochar can also be burned to extract energy, like commercial charcoal.

While the current prototype can serve four to six people a day, a larger facility that could serve several households is under design. The target is to keep the costs of using it at no more than five cents (about Rs 3) per person per day, the limit set by the Gates Foundation.

The biochar toilet will be among technologies to be showcased at an exhibition called the Reinvent the Toilet fair, co-hosted by the Gates Foundation and India’s department of biotechnology, where teams from 15 countries will display their inventions.

Kerala-based Eram Scientific Solutions plans to demonstrate a working model of what is being labelled an electronic toilet, or e-toilet, that will use water generated from the atmosphere.

About 400 prototype e-toilets that automatically clean after each use and the water gets recycled for flushing have already been deployed at select sites in Kerala and six other states in India. Eram is hoping to install its e-toilets in Bihar.

The unit to be displayed in Delhi will feature an atmospheric water generator — a system that draws water vapour from the air to generate water for use in the toilet. In coastal states where humidity is high, Eram executives say, the water generator could produce up to five litres of water an hour.

“These are steps towards making a standalone toilet that will neither require grid electricity nor any external source of water,” said Bincy Baby, a civil engineer and Eram executive.

The foundation has supported toilet reinvention research groups in the US, the Netherlands, Switzerland, Britain, Singapore, Canada, South Africa, India and Thailand.

A team at the California Institute of Technology was funded to produce a toilet that uses solar power for an electrochemical reactor that will break down water and human waste. The excess power may be stored to provide energy during night operations or when sunlight is poor.