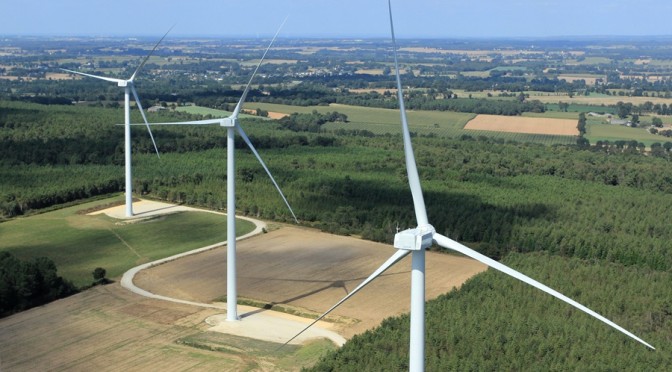 Alstom has been awarded a contract 1  by GS Engineering & Construction (GS E&C), a large engineering and construction services company in Korea, to provide wind turbines for Gimnyeong wind farm located in Jeju Island, Korea. Under the contract, Alstom will supply and supervise the installation and commissioning of 10 units of the ECO 110 onshore wind turbines with 90m towers, each with an output of 3MW.  When operational, the wind farm will have a production capacity of 30MW.

The wind farm, to be fully operational by the end of 2014, will support Korea’s aim to increase the country’s renewable energy portfolio.  The Gimnyeong wind farm will be operated by SPC “Gimnyeong wind power”. GS Electrical Power & Services (GS EPS) is a major shareholder of SPC, and a leading Independent Power Producer in Korea with 1500 MW in operating assets.

The Alstom ECO range of products — with its ALSTOM PURE TORQUE® design — transfer bending loads directly to the tower, which allows for higher reliability of the drive train and reduced operation and maintenance costs over the lifetime of a wind turbine.

“It is an honor to be a part of Korea’s dedication to increasing its renewable energy footprint  and to help the country to reach the goal to grow its wind capacity to over 20% of all capacity by 2027 2 . This opportunity is significant for Alstom as it will represent our first Wind Power contract in the Korean market.” said Yves Rannou, Senior Vice President, Wind.

Korea has a population exceeding 50 million. With its limited domestic energy sources and huge demand, Korea relies on foreign sources for 96% of its energy supply. In order to diversify its energy sources and increase the production of domestic energy, Korea has recently increased its focus on renewable energy. Between 2011 and 2015, 10 trillion KRW (South Korean Won) is expected to be invested in wind power as a source of renewable energy.  In October 2013 a draft plan was made to the National Energy Plan to increase the Wind target from 7.3GW to 12GWby 2030 3.

Alstom has been present in Korea for over 45 years, having supplied equipment to over 34% of the country’s hydro plants as well as the first TGV export systems solution in the KTX Project and the first High Voltage Direct Current link between Haenam and Jeju, among others