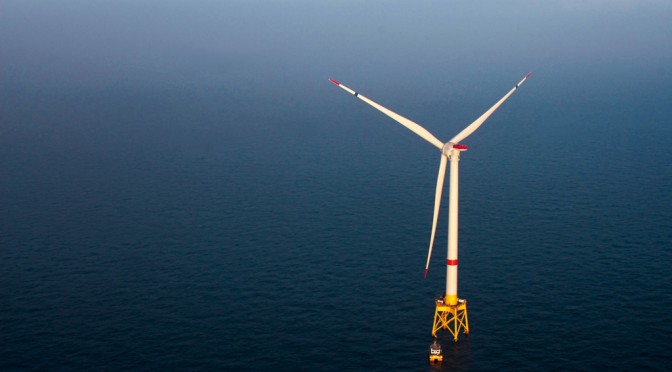 The project, scheduled for commissioning in 2016, will be one of the first offshore wind farms in the U.S. and will be the world’s first to feature Alstom’s Haliade™ 150-6 MW – the largest turbine installed in offshore waters today. The five turbines will produce approximately 125,000 MWh of electricity a year, enough to power over 17,000 homes.

This project will be the first to support the exportation of offshore wind turbines from France and will leverage the French industrial base Alstom is developing. Indeed the wind turbines have been developed in Alstom’s Marine Energies Research and Development Centre in Nantes and will be manufactured in the 2 Alstom’s factories in Saint-Nazaire (France) due for completion at the end of 2014 (nacelles and generators) and in Cherbourg (blades and towers), for which a building permit has been submitted. In total, these factories should create around 5,000 direct and indirect jobs.

The contract scope includes the manufacturing of 5 Haliade™ 150-6 MW wind turbines and 15 years of operation and maintenance support for the Block Island Wind Farm owned and operated by Deepwater Wind.

The Haliade™ 150-6 MW wind turbine operates without any gearbox (using direct-drive), thanks to a permanent-magnet generator. The machine features Alstom’s Pure Torque® design which protects the generator by diverting unwanted mechanical stress towards the tower, thereby optimising performance and reliability. Its 150-metre diameter rotor provides an energy yield that is 15% better than existing offshore turbines, supporting the effort to drive down the cost of energy from offshore wind.

“This contract demonstrates our excellent commercial dynamic in offshore wind as well as the credibility of our technology platform. It shows that we can be successful in serving both the growing international markets and our strong domestic market here in France. It also allows us to concretely implement the various partnerships we have formed with local companies” said Jerome pécresse Alstom’s Renewable Power Sector President.

The Block Island project could lead to a larger utility-scale offshore wind farm of more than 1GW supported by a regional transmission system linking Long Island, New York and south-eastern New England. The project is aligned with The Bureau of Ocean Energy Management’s “Smart from the Start” offshore wind programme, which aims to accelerate the development of offshore wind along the eastern seaboard of the U.S.

This project represents an important technological step for the Haliade 150-6MW. Along with the installation of 2 wind turbines in Europe – the first onshore at le Carnet site (in the western region of France), and the other in Ostend, Belgium – this pilot farm in the U.S. will enable Alstom to develop its offshore technology to the point where it can launch serial production. 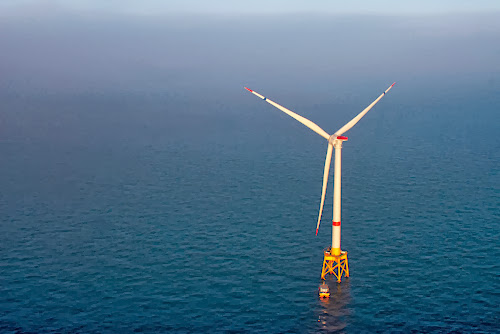 In France, Alstom will equip 3 wind farms (Courseulles-sur-Mer, Fécamp and Saint-Nazaire) won by EDF EN and its partners as a result of the first French call for tender offshore, and today participates with EDF to the second call for tender for Le Tréport wind farm and the two islands wind farm (Yeu-Noimoutier).

In Germany KNK Wind (the project development company for Arcadis Ost 1) has chosen the Haliade™ 150-6MW in December 2013 in support of a building permit for a project to install 58 wind offshore turbines on an area of about 30 square kilometres in Baltic Sea.