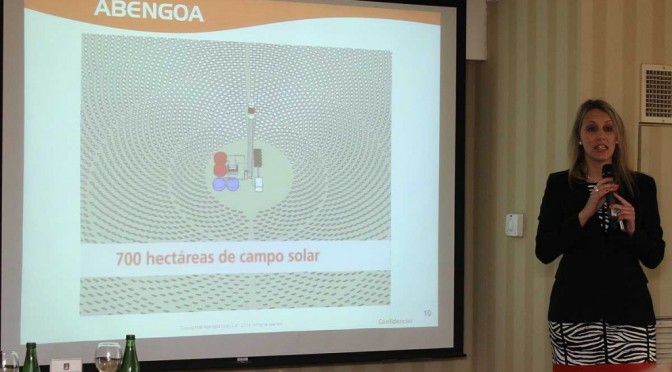 The Concentrating Solar Power (CSP) plant, which will use molten salts tower technology, will have an advanced storage system enabling it to generate electricity for up to 17.5 hours without direct solar radiation.

The  Concentrating Solar Power (CSP) plant, which will use molten salts tower technology, will have an advanced storage system enabling it to generate electricity for up to 17.5 hours without direct solar radiation.

Abengoa (MCE: ABG.B/P SM /NASDAQ: ABGB), the international company that applies innovative technology solutions for sustainability in the energy and environment sectors, has been selected by the Ministry of Energy of the Chilean Government and Corfo (Corporación de Fomento de la Producción) to develop a 110 MW solar plant using tower technology with 17.5 hours of thermal energy storage using molten salts. The project will be located in the Atacama Desert, the region with the highest solar radiation concentrations in the world. It will be the first solar-thermal plant for direct electricity production in South America.

Abengoa’s project won the international tender launched by the Chilean Ministry of Energy and Corfo to construct the first Concentrated Solar Power plant in Latin America. As part of this tender, the project will receive direct subsidies from the Chilean Government and the European Union, as well as financing from the Inter-American Development Bank, KFW Kreditanstalt für Wiederaufbau, the Clean Technology Fund and Canadian Fund.

Solar-thermal tower technology uses a series of mirrors (heliostats) that track the sun on two axes, concentrating the solar radiation on a receiver on the upper part of the tower where the heat is transferred to the molten salts. The salts then transfer their heat in a heat exchanger to a water current to generate superheated and reheated steam, which feeds a turbine capable of generating around 110 MW of power.

The solar plant will also have a pioneering thermal storage system with 17.5 hours of storage that has been designed and developed by Abengoa. This makes the technology highly manageable, enabling it to supply electricity in a stable way, 24 hours a day, responding to all periods of electricity demand.

Abengoa’s new project will be located in the commune of María Elena in the Antofagasta region, northern Chile. The project forms part of Chile’s national renewable energy program, intended to provide Chile with a cleaner energy future, while also promoting its economic development and reducing its dependency on coal and natural gas. Chile has set a target to produce 20% of its electricity from clean energy sources by 2025.

Abengoa’s project in Chile will prevent the emission of approximately 643,000 tons of CO2 into the atmosphere every year. Furthermore, the construction, operation and maintenance of this plant will act as a catalyst for regional socio-economic development, creating a large number of direct and indirect jobs for the construction, development, commissioning and operation of the plant as well as a network of services that will promote economic growth in the country. Construction of the project is due to start in the second half of 2014.

Abengoa has been present in Chile since 1987, where it has carried out numerous projects. This new plant will consolidate its commitment to solar-thermal energy and demonstrates the huge potential for this technology in this country. Abengoa currently has 1,223 MW of installed capacity in commercial operation, 430 MW under construction and 320 MW in pre-construction, including both solar-thermal and photovoltaic technology. Abengoa is the only company in the world to construct and operate solar-thermal plants using both tower and parabolic trough technologies.