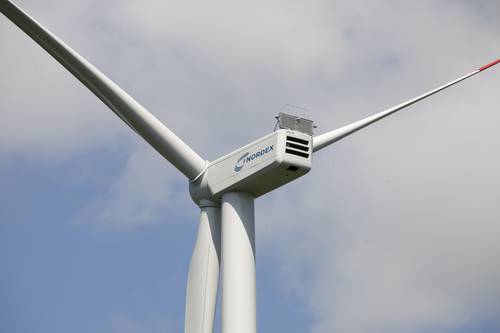 In December 2013, Nordex SE received a contract from wpd europe GmbH for the delivery and installation of eleven turbines for the Mäkikangas wind farm.

The Mäkikangas wind farm is being built on the west coast of Finland close to the town of Pyhäjoki at a site with an annual average wind speed of approx. 8 metres per second. For this reason, N117/3000 Generation Delta turbines will be used and installed by Nordex during this year. The wind turbines have a hub height of 141 metres in order to generate the greatest possible electricity yield. With their high towers, the large rotor sweep of 10,715 square metres and an installed nominal output of 3 MW each, the eleven turbines at the Mäkikangas wind farm will generate an annual yield sufficient to supply 24,000 homes. As the site experiences periods of extremely low temperatures of down to minus 30 degrees, Nordex will be supplying the turbines in the cold-climate version.

Mäkikangas is wpd’s first project in Finland. For Nordex, the contract underscores the great confidence shown by its long-standing customer. “We are pleased that wpd has again opted for our turbines and has decided to order our Generation Delta this time. Several turbines of this platform are already in operation in Germany, Denmark and Finland”, says Lars Bondo Krogsgaard, a member of Nordex’s Management Board.
As one of the technological leaders in multi-megawatt wind power systems, Nordex is benefiting from the trend in favour of large-scale turbines. The Generation Gamma range comprises the N90/2500, N100/2500 and the N117/2400, which is one of the most efficient onshore turbines. To date, over 2,600 of these turbines have been produced. This experience with multi-megawatt turbines gives Nordex a decisive lead over most of its competitors. With Generation Delta, Nordex is now offering the fourth generation of its proven multi-megawatt platform (N100/3300, N117/3000, N131/3000). Nordex has installed a total of around 5,600 turbines with an aggregate capacity of more than 9,000 MW all around the world. With exports accounting for more than 85 percent of its business, Nordex SE plays a key role in international high-growth regions. The Company has offices and subsidiaries in 22 countries around the world with a total global headcount of over 2,500 employees.