China has embarked on the greatest push for renewable energy the world has ever seen.

A key element involves more than doubling the number of wind turbines in the next six years.

From a current installed capacity of 75 gigawatts (GW), the aim is to achieve a staggering 200GW by 2020.

By contrast, the European Union countries together have just over 90GW of installed wind capacity.

The far western province of Xinjiang is one of seven areas designated for wind development.

Against a backdrop of snow-capped mountains, turbines are massed in their thousands over the frozen desert.

New units are being installed in a frenzy of construction in which the pace of work has been accelerated.

Jiang Bo, an engineer with the manufacturer Goldwind, told me: “Seven years ago we could only do one wind turbine in about two days – but our current speed is that we can do two in one day.”

However, integrating this surge in wind power has posed a series of challenges. 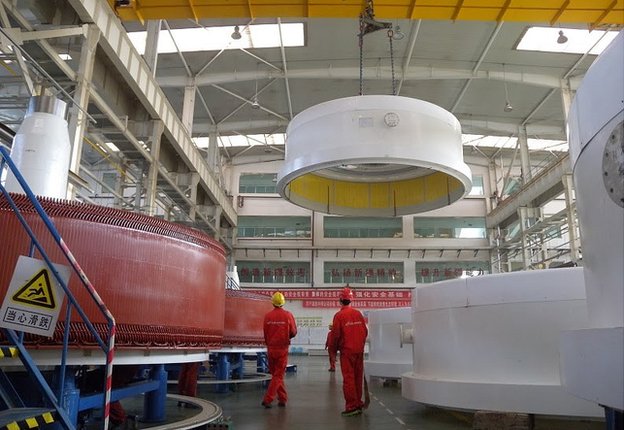 The windiest regions, such as Xinjiang, tend to be extremely distant from the biggest cities where the electricity is most needed.

And the construction of wind farms has often outstripped the building of the connections needed to link the turbines to the grid.

The grid itself, accustomed to handling the predictable output of power stations burning coal, has struggled to cope with the intermittency of wind.

The result has been that some wind farms have been ordered to shut down even on windy days – a process known as curtailment.

Last year as many as 20%-30% of turbines across China were left idle at particular times but wind industry officials say the problem is now being tackled.

A more fundamental question is the likely contribution of wind power to China’s insatiable demand for energy.

The most recent figures, for 2012, show that wind only generated 2% of the country’s electricity. Coal, the largest contributor, generated 75%.

However, since China’s total generation is more than that of all European Union countries combined, wind’s percentage is large in absolute terms.

“In fact, last year wind surpassed nuclear to become number three after coal and hydro, and it’s got a lot more potential.”

The sheer scale of the wind market is encouraging mass production which has lowered prices and fostered innovation.

Until recently, Chinese wind manufacturers produced Western-designed turbines under licence. Some acquired a reputation for turning out inferior products.

Now, the wind boom has led to a flurry of new designs. Goldwind, for example, offers a turbine which does not need a gearbox but instead has a “direct drive” system designed to be cheaper to maintain. 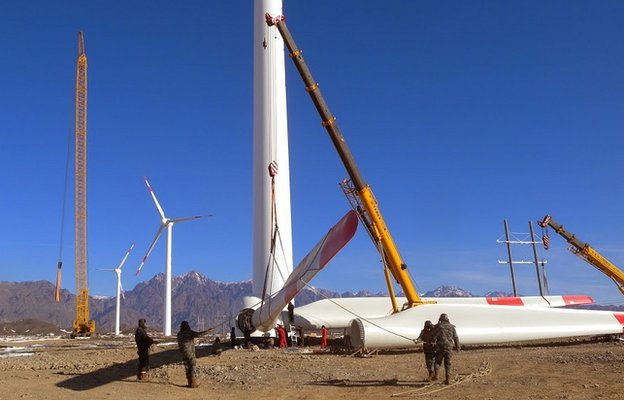 Workers are putting up two wind